World Cross Country: UAF speaks out on challenges they met

Out of the sh6b which the organisers had asked for, New Vision has learnt that government only received sh2.2b. 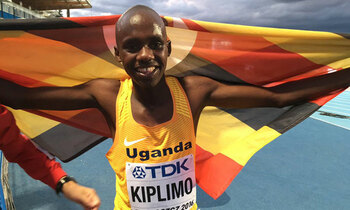 Jacob Kiplimo, 16, became the first Ugandan to win a gold medal at the World Cross Country Championships when he put up a great performance on home soil on Sunday.

After receiving sharp criticisms from the public about the poor publicity that was given to last Sunday's World Cross Country held at Kololo Airstrip in Kampala, the local organisers have asked Ugandans to look at the positive part of the event.

Godfrey Nuwagaba a member of the national organising committee of the event told New Vision that they worked through a number of challenges that Ugandans need to understand and appreciate their efforts. "Up no now we still have a lot of stress because service providers have kept calling us for their pay," Nuwagaba said.

The organisers have been bashed for giving the event less publicity, which denied Ugandans a chance to tap into the visitors' wallets for a living as the case has been in the past.

Nuwagaba revealed that one of the challenges they had was inadequate resources to spearhead a vibrant campaign strategy to draw the attention of Ugandans.

"The money we received was very little and came in very late but we could not run to the media to complain that the funds were not coming on time because it would frighten away the visitors," he said.

Out of the sh6b which the organisers had asked for, New Vision has learnt that government only received sh2.2b.

Beatrice Ayikoru, the Secretary Organising Committee and General Secretary of the Uganda Athletics Federation told Saturday Vision that they have now learnt what didn't go right and should be able to host such events in a much better way next time.

For more details about this story, buy your copy of Saturday Vision or subscribe for the Epaper