"President Zuma will not attend the funeral and memorial service in compliance with the wishes of the family," it said. 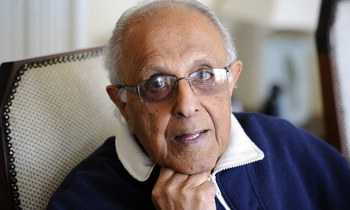 President Jacob Zuma will not attend the funeral on Wednesday of celebrated South African anti-apartheid activist Ahmed Kathrada, who in recent years had become fiercely critical of the government.

While most of the country's leadership will be present, Kathrada's family asked Zuma to skip the event, the president's office said in a statement.

"President Zuma will not attend the funeral and memorial service in compliance with the wishes of the family," it said.

Kathrada, one of Nelson Mandela's closest colleagues in the struggle against white minority rule, died on Tuesday, aged 87.

After his retirement from politics in 1999, Kathrada kept a low profile, but in recent years had chosen to speak out.

He openly criticised the current African National Congress (ANC) government of Zuma, which has been accused of corruption, mismanagement and of failing black South Africans.

Last year Kathrada wrote an open letter to Zuma urging him to step down.

"I know that if I were in the president's shoes‚ I would step down with immediate effect," it said.

"Today I appeal to our president to submit to the will of the people and resign."

Kathrada was among those tried and jailed alongside Mandela in the 1964 Rivonia trial, which drew worldwide attention to the brutalities of the apartheid regime.

He died in hospital in Johannesburg after a short illness following brain surgery.