Villa are now on 44 points, three ahead of second placed KCCA 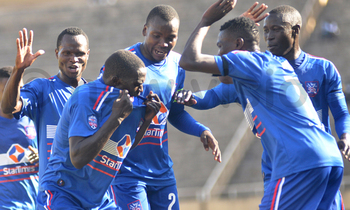 Emmanuel Okwi scored his seventh goal in seven games since re-joining the record league champions before left back John Adriko sealed the victory.

Villa are now on 44 points, three ahead of second placed KCCA who were not in action due to their preparations for Saturday's CAF Champions League encounter against African Champions Mamelodi Sundowns.

The reigning league champions however have four games in hand.

At Namboole, Sadolin Paints settled for a goalless draw with Lweza.

Allan Kyambadde notched a brace as Express defeated Police 4-3 in an entertaining encounter at Wankulukuku Stadium.

Mahad Kakooza and Simon Sserunkuma added the others for Express while Michael Birungi's double and Ibrahim Kibumba strike were not enough to deny the Red Eagles victory.