Ugandan team off to Austria for Special Olympics Winter Games

Team Uganda will compete in floor hockey with other teams that do not experience winter in their countries. 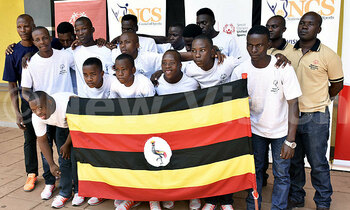 PIC: The Ugandan Special Olympics team poses for a photo after being flagged off. (Credit: Johnson Were)

"I will be happy if the athletes meet their target and I am confident they will deliver and win more medals for Uganda," said the coach.

Team captain Jimmy Muyomba said his team targets more medals than what they won in the previous event (2013 Korea Games).

The Ugandan team will be competing in floor hockey with other teams that do not experience winter in their countries.

During the Winter Games, nations that do not experience winter are given an opportunity to compete in floorball and floor hockey.

"I am very grateful that Special Olympics has given us this opportunity to express our talents and we shall use it to be recognised as athletes."

"We have given you four tickets just because all resources were given to the basketball team but next time it will be bigger support."