Several far-right lawmakers said the Republican plan abandons conservative fiscal principles by maintaining government subsidies of the Affordable Care Act, but under the guise of "refundable tax credits" for people to purchase their own health insurance. 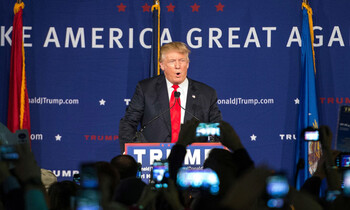 US President Donald Trump faced mounting concern from fellow Republicans Tuesday over their party's plan to replace Obamacare, with conservatives warning the bill was too similar to existing controversial health care law.

Several far-right lawmakers said the Republican plan abandons conservative fiscal principles by maintaining government subsidies of the Affordable Care Act, but under the guise of "refundable tax credits" for people to purchase their own health insurance.

"This is Obamacare Lite, it will not pass," fumed Senator Rand Paul on Fox News.

Later, he told reporters that Republicans were "united on repeal, but divided on replacement."

Other Republicans described the bill -- the result of seven years of effort -- as a missed opportunity, even a step in the wrong direction.

"We don't know how much it will cost, and we don't know if this bill will make health care more affordable for Americans," said Senator Mike Lee, who opposes the use of tax credits.

With rebellion brewing, Trump hosted more than 20 House Republicans at the White House, where he said he is "proud" to back the plan and anticipated Congress would vote to repeal Obamacare "quickly."

"They want Obamacare over," he said of Americans who voted Trump into office. "So let's get it done."

The legislation gets its first official review in Congress Wednesday, when two House committees debate and possibly amend the bill.

Republicans control the White House and both chambers of Congress.

If enough Republicans defect, particularly in the Senate, where they hold a narrow 52-48 majority, the highly anticipated repeal-and-replace plan could collapse.

House Speaker Paul Ryan, who has shepherded the bill through several drafts, sought to downplay divisions within his party.

"We will have 218 when this thing comes to the floor, I can guarantee you that," Ryan said, referring to the majority votes needed to pass legislation in the 435-member chamber.

The pro-free-market Club for Growth labeled it "Ryancare," after the speaker, and said it was a "warmed-over substitute for government-run health care."

Meanwhile, Vice President Mike Pence was dispatched to the US Capitol to huddle with Senate Republicans in a show of support for the legislation that was crafted by House Republican leadership.

Pence said afterwards that the bill remained "open to improvement" through the legislative process.

That debate is proceeding apace "and will continue to be vigorous," said Senator Ted Cruz, who said he had "a number of concerns" with the House legislation.

"We can not do nothing at all," Cruz said. "Failure is not an option."

The bill has come in for criticism from more moderate factions too, including four Republican senators whose states expanded the low-income Medicaid program through Obamacare.

Those states' Republican governors are concerned that the planned phaseout of the expansion under the new bill would leave thousands of residents without coverage.

Reforms implemented under then-president Barack Obama are credited with helping 20 million Americans gain coverage, but have been criticized for rising premiums and other costs.

Democrats have savaged the bill as an immoral shift of costs from the wealthy to poor and working-class Americans.

Health and Human Services Secretary Tom Price explained that "it's the beginning of the process" and that extensive negotiations were ahead.

The goal, top Republicans said, is swift debate and adoption of the Obamacare substitute prior to the Easter break that begins April 8.