A single tomato costs between sh300 to sh500 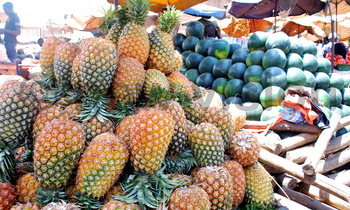 Food prices in Kampala continue to rise per day. In a survey by New Vision it was found that a bunch of matooke at Kasanga market costs sh30,000 up from sh25,000.

"The prolonged dry spell has largely contributed to the increase in prices of most food staff. For instance, it now costs sh2,400 to purchase a kilogramme of maize flour from sh2,000, rice (Kaiso brand) sh3,200 from sh2,600, and Pakistan brand sh3,800 from sh3,000" said Nanteza.

"We are so much perturbed by the prices of maize flour and rice which have doubled," Nanteza said.

The price of tomatoes and onions has also increased.

"Tomatoes no longer cost sh100 or sh200. A single tomato costs between sh300 to sh500. It is on such premise that some shoppers have resorted to purchasing spices as a substitute to tomatoes.

Nanteza is optimistic that with the rains that have started falling, chances are high that prices will reduce in the next three to four months.

"I do not expect prices to reduce next month because farmers have started planting," she noted.

The recent Consumer Price Index (CPI) data released by the Uganda Bureau of Statistics (UBOS) indicates that annual headline Inflation rose to 6.7% in February from 5.9% that was recorded in January 2017.

CPI measures the price movements in a basket of goods and services over a given period of time.

UBOS principal statistician, Vincent Nsubuga, attributed the rise to increase in prices of food crops to 18.8% from 14.5% previously recorded especially prices of vegetables.

Economic analyst Simon Peter Nsereko, noted that rise in inflation is not a surprise due to the long dry spell.

"As Uganda still depends on rudimentary methods of farming and no irrigation, it means whenever it is a dry season, inflation increases" Nsereko said.

He added that Uganda's inflation is not worrying because it is within the medium term target.

"As long as inflation is less than 10%, it is within the target" he added.

Nsereko explained that price increase is worrying because it affects low income earners since they cannot afford the food.

He explained that to the consumers, it means that he has to change their consumption habits and basket of goods because currently their income can purchase less commodities.

"As weather patterns change, there are higher chances that the response will be good although we do not expect to see an immediate response" Nsereko added.