"It's long since I ran before a home crowd. It is time they also saw me in action live." 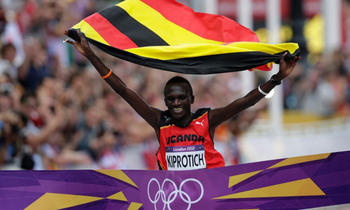 Can Stephen Kiprotich add a world cross country medal to his already rich collection of accolades?

Uganda will be praying this question is answered in the affirmative when Kiprotich competes in the global event on March 26 in Kampala.

The former Olympic and World marathon champion got many by surprise when he declared his intentions to compete at Kololo.

"It's long since I ran before a home crowd. It is time they also saw me in action live," said Kiprotich.

Many who saw the Ugandan Prisons officer strike gold in London and Moscow are not aware that Kiprotich is not new to cross country running.

He finished sixth at the 2011 edition in Punta Umbria, Spain. A short while later he chose to concentrate on the road.

Born in Cheptiyal village, Kapchorwa District, Kiprotich is one of the friendliest athletes. He always finds a way of making people laugh with his sense of humor.

But besides this humorous end, there is a serious side to this lean runner. When he sets his mind on doing something he never gives up before achieving his goal. His determination is underlined by his decision to move to Kenya in 2011 for training.

He has since had the Kenya highlands in Eldoret as his training base.

His vast distance running talent was first seen at the 2011 World Championships where he finished sixth in the marathon. He thereafter went to Enschede Marathon to pace the group through 30km.

Doing so in a very easy and smooth way he decided to finish the race, that's how he set a new course record.

Prior to the London Olympics he finished third in the Tokyo marathon. After his Olympic gold he returned to London where he became sixth in one of the strongest marathon fields ever.