Haye, 36, sustained the injury after slipping in the sixth round. 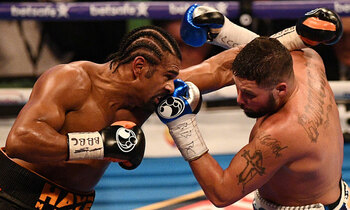 David Haye has undergone surgery on the Achilles tendon he ruptured during Saturday's heavyweight defeat by fellow Briton Tony Bellew, his representatives have announced.

Haye, 36, sustained the injury after slipping in the sixth round and fell to a surprise defeat in the 11th round when his corner threw the towel in after Bellew knocked him through the ropes.

"David underwent surgery to his right Achilles this afternoon, after completely rupturing the tendon during Saturday night's fight with Tony Bellew," read a statement from Haye's representatives released late on Sunday.

"David would like to thank everyone for their many messages of support, as well as the staff at the hospital."

WBC cruiserweight champion Bellew, 34, has revealed he broke his hand early in the fight.

Bellew, who appeared in the 2015 'Rocky' franchise film 'Creed', has revealed he is considering retirement, but says a big-money fight will be difficult to turn down.

"I don't know how many times more I can put my body and family through this," Bellew told BBC Radio 5 Live.

Asked whether he might retire, he replied: "It's an option. It's something I'm thinking about."

"I have a lot of options," Bellew said. "I don't know what's going to happen, but it will have to be something special."