British Prime Minister Theresa May has said she expects to trigger Article 50 of the EU treaties -- the official divorce process -- by the end of March. 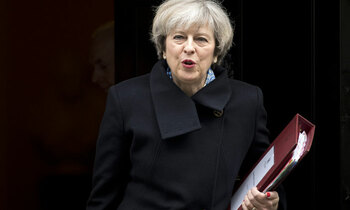 The European Union is planning a special summit for April 6 if Britain triggers its exit from the bloc as expected this month, EU sources said.

National leaders would meet in Brussels on that date to set formal guidelines for the two-year negotiation process for Brexit, said the sources on condition of anonymity.

British Prime Minister Theresa May has said she expects to trigger Article 50 of the EU treaties -- the official divorce process -- by the end of March.

Britain voted to leave the EU in a shock referendum result last June.

European Council President Donald Tusk's office had warned diplomats to keep April 6 and 7 free in case May does pull the Brexit trigger as expected.

The process remains uncertain however as May is waiting for the House of Lords, the upper chamber of the British parliament, to approve a bill to start the divorce proceedings.

If May then waits until after a key meeting of the other 27 EU leaders in Rome on March 25 to mark the bloc's 60th anniversary, that could be too late for an April 6 summit, the sources added.

Some officials expect Britain to wait until after the Rome meeting in order not to "tarnish" the bloc's birthday celebrations.

Actual Brexit negotiations may not start until two months after May begins the process, the sources said.

At a special Brexit summit, the leaders will officially give the European Commission, the EU's executive arm, the mandate to lead the negotiations with Britain.

The summit will involve "high politics" due to the national sensitivities involved on key issues touched by Brexit.

The commission's "Monsieur Brexit", Michel Barnier, cannot actually begin negotiating with London until the commission issues its own detailed guidelines, with the whole process likely to last until May.

Barnier has said he wants to discuss Britain's exit bill before getting on to future trade relations between the EU and London.

He has added that the outline of a deal needs to be ready by October 2018 so it can be passed by the European Parliament before it goes into elections in mid-2019.