Kalisizo Magistrates Court remanded a 28 year-old man to Kalisizo Prison for allegedly impersonating a charitable organisation official and conning more than 35 widows of their money. 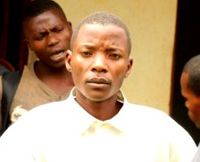 The suspect identified as Peter Kasiita, a resident of Byerima village, is said to have collected more than sh1.5m from the widows after masquerading as a Community Transformation Foundation Network (COTFONE) employee.

COTFONE is an NGO that responds to vulnerable children living in rural households.

Carrying a fake COTFONE identity card plus other forms and documents, Kasiita convinced the unsuspecting widows to pay 50,000 shillings for registration of the orphaned children so as to benefit from the purported free education scheme.

Sarah Nakasendwa, one of the affected widows, told New Vision that they were forced to pay the money to get free sponsorship for their children. She explained she paid for one boy but got stuck after waiting for Kasiita for two days in vain.

Betty Nabasumba, another widow, said that she borrowed the money and paid for her daughter in anticipation of being relieved of the school fees burden. She added that her two friends sold their goats and paid for their children.

Kasiita had promised to return after two days to take the pictures of the widows and the orphans but disappeared and never returned.

However, this prompted the widows to storm COTFONE offices in Kyabakuza-Masaka seeking for intervention.

Kasiita was arrested on Thursday and detained at Kalisizo Police Station following a tip by the COTFONE officials in collaboration with several community leaders.

He was arraigned in court Friday before Joy Nambozo, the Kalisizo Grade One Magistrate and pleaded not guilty. However he was remanded until 14th March.

He added that he has received several complaints that conmen use their company name to dupe people in Rakai.

He explained that COTFONE services to vulnerable children are free. Kayinga further appealed to the public to always consult them before transacting any deal to avoid losing their money.

Conmen have been rampant in Rakai for several years. In 2012, Police in Kalisizo arrested Gayita Namuddu for conniving with John Paul OKiror to con residents of sh6m.