Kim Jong-Nam -- the eldest son of the North's late leader Kim Jong-Il -- died on February 13 after being attacked by two women at a Kuala Lumpur airport in what is suspected to be a murder planned by Pyongyang. 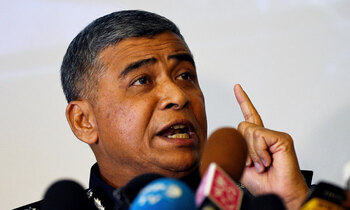 South Korea is using giant loudspeakers to blast news of the dramatic assassination of North Korean leader Kim Jong-Un's half-brother across the border with its reclusive northern neighbour, it was reported Thursday.

Kim Jong-Nam -- the eldest son of the North's late leader Kim Jong-Il -- died on February 13 after being attacked by two women at a Kuala Lumpur airport in what is suspected to be a murder planned by Pyongyang.

The North's state media remained quiet on the killing until it released a scathing denouncement of the Malaysian investigation Thursday, without identifying Jong-Nam as the victim.

But the South this week employed its banks of high-decibel loudspeakers to ensure details of the death of Jong-Nam, once believed to be the likely heir, reverberated through wide swathes of the border area, Seoul's MBC TV station said.

"Kim Jong-Nam... died after being attacked by two unidentified women at the Kuala Lumpur International Airport in Malaysia," blared the message from the speakers and replayed by the TV station.

"Malaysian authorities said four suspects are North Korean nationals including one who has been arrested," it said.

News of the outside world is heavily restricted and censored in the North under the Kim family, which has ruled for decades with an iron fist and pervasive personality cult.

The South Korean military has for years blasted a mix of world news, propaganda messages and K-pop songs across the border using dozens of loudspeakers, which targets soldiers in the isolated state. They have a range of around 10 kilometres (six miles).

North Korean state media Thursday broke its 10-day silence on the murder, launching a ferocious assault on Malaysia for its "immoral" handling of the case and for playing politics with the corpse.

The propaganda broadcasts are intensely hated by Pyongyang which at one point threatened to shell the loudspeakers.

The North is also known to have installed a number of loudspeakers near the border to carry out its own propaganda broadcasting in a bid to drown out the sound from the South.

Jong-Nam was at one time set to take the reins of power in the isolated North; groomed by his father for a third generation succession.

But he fell out of favour and lived in exile in China as his younger brother was groomed to take power following the death of their father in 2011.