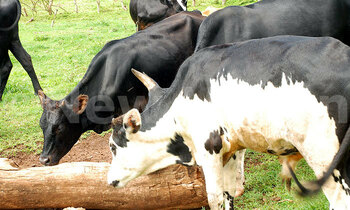 Gene editing, which has raised ethical concerns due to its capacity to alter human DNA, is being considered in the United States as a tool for improving livestock, experts say.

The technique is different than that used in genetically modified organisms (GMOs) because it does not introduce foreign genes, but rather alters already existing DNA.

But scientists and consumer groups say there is not enough evidence yet to shed light on the potential risks of gene editing, particularly regarding its trickle-down effects on the environment and the ecosystem.

"Gene editing is one of the newest and most promising tools of biotechnology," Alison Van Eenennaam, an expert in animal genetics and biotechnology at the University of California, Davis, told the annual meeting of the American Association for the Advancement of Science.

"Thanks to improvements made in the dairy industry through traditional breeding, a glass of milk today is associated with just one third of the greenhouse gas emissions linked to producing a glass of milk in the 1940s," Van Eenennaam said.

This technique has already been used to make certain animals resistant to disease, such as pigs that are resistant to porcine reproductive and respiratory virus.

A tuberculosis-resistant form of cattle was also reported recently out of China.

Van Eenennaam is working on a gene editing technique that allows cows to be born without horns.

Typically, the animals are born with them but undergo a painful process to remove them when they are young so that they don't damage other cows or people working with them.

Some breeds, such as Angus cows, naturally carry a genetic mutation that prevents them from growing horns.

Gene editing has the ability to modify a normal, identical gene in Holstein cows and insert this same genetic variation seen in the Angus.

This trait is then passed down to the cow's offspring.

Other teams of geneticists around the world are hoping to benefit from gene editing techniques.

For instance, it is now possible to alter chickens so that they only lay eggs that produce female chicks, a practice that can double the output of a chicken farm and curb the cruel practice of killing roosters.

Researchers are also working on a variety of chicken that would be resistant to bird flu, a potentially deadly disease that regularly devastates flocks worldwide and can spread to people.

Gene editing can also improve plant growth, said Dan Voytas, a professor of genetics and cellular biology at the University of Minnesota who has used the CRISPR/Cas-9 simple yet powerful gene-editing technique to improve soy crops.

"We are probably the first genome-edited product to enter the food supply," he told the AAAS conference.

"We have a soybean product which produces a healthier cooking oil, it is high in non saturated fat, no transfat."

But Doug Gurian-Sherman, a plant pathology expert at the Center for Food Safety, warned that certain applications could be risky.

For instance, research that alters the genes of insects and grains to fight resistance to insecticides and herbicides could introduce mutations in nature that modify entire populations of animals and plants in the course of just a few years, potentially destabilizing the food chain and allowing other species to invade.

"It's just they raise safety issues, and there should be required safety assessments."

In November, a US Department of Agriculture advisory board unanimously recommended that standards for organic foods exclude gene-edited crops even if they were grown without chemical fertilizers.

Then, the US Food and Drug Administration said in January that all animals whose genomes have been intentionally altered must be examined for safety, much the same way as new drugs are scrutinized before they hit the market.

"It's not yet clear what regulatory status food-animals produced with gene editing will have," said Van Eenennaam.