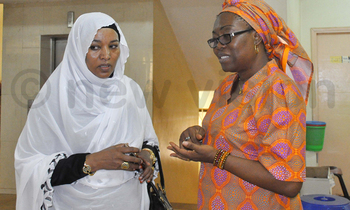 The executive director, Isis-Women's International Cross Cultural Exchange (Isis-WICCE), Helen Kezie-Nwoha has called on African governments to put mechanisms in place to be able to address the challenge of refugees at home.

Her call follows concerns over a number of European countries that have started rejecting refugees.

Despite several discussions and debates around the rights of refugees settling in other countries, of recent, a number of European nations especially Central Europe have made it clear they are not willing to welcome many newcomers.

Speaking at the sidelines during the lecture on "Peace and Security from a Global and Sudan/Uganda Perspective" held at Makerere University on Wednesday, Kezie said under the humanitarian law, all countries that have signed into it have the mandate to receive refugees and be able to provide for them all kinds of support until their countries are in peace and can return back.

"We are very concerned that some European countries are beginning to reject many of these refugees. We call in on the governments in Africa to put in place mechanisms to be able to address the challenge of refugees within the continent other than letting them suffer" she said

She also did not spare the US, saying it is quiet disturbing and disappointing that a country which prides itself in being the role model of democracy and humanitarian support in terms of addressing peace and security in most of developing countries and countries in conflict is the same one turning its back on refugees especially under the new administration.

"If USA can do this, we are now looking at who is going to be the next leader in terms of addressing issues of peace and security, but also in terms of supporting humanity to deal with the refugee crisis. I hope that in the next weeks Washington will be able to look into this issue, and take the leadership that is expected from the world," she added.

She also called upon governments in the region to implement the provisions of the International Conference of the Great Lakes that calls for first tracking the justice system to address sexual violence cases, but also to provide holistic mechanisms that will look at the issues of psychosocial and legal support to women survivors of sexual based violence.

The meeting was organized by (Isis-WICCE) and school of Women and Gender Studies, Makerere University and attended by Sudan Women ministers, Commissioners, Civil Society leaders and the academia.

The lecture led by Prof. Deborah Mulumba of Kyambogo University aimed at providing a learning environment on the processes that Uganda has undertaken in the development and review of the United Nations Security Council Resolution 1325 National Action Plan for Uganda (NAP-U).

Abunagma M. Saad, the associated professor of psychology, University of Khartoum who led the delegation said though Uganda is doing the revision of NAP, Sudan has not yet signed their NAP, and therefore came to learn and gain experience on how the program has succeeded.

On the other hand, Dr. Sousan Mohamed from South Sudan was also concerned about the persistent war, saying people are still being killed, and yet there is no humanitarian access to the people. She called upon South Sudan leaders to engage in dialogue to be able to end this war.

"War is not a language of human beings; God gave us the brains to have a spirit of dialogue to accept each other, to forgive, because in the war situation, no winner, as South Sudanese, we want to have dignity and live in harmony with each other" she said

She called upon civil society organizations in South Sudan and international community to engage the leaders to ensure the war comes to an end.