Civil defence officials declared a state of emergency in the South Island city late Wednesday as two blazes that had been smouldering for days merged into a single giant fire-front. 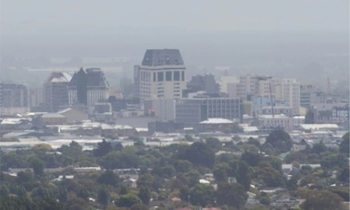 A wildfire destroyed at least 11 homes and forced hundreds of terrified residents to evacuate in the New Zealand city of Christchurch, authorities said Thursday.

Civil defence officials declared a state of emergency in the South Island city late Wednesday as two blazes that had been smouldering for days merged into a single giant fire-front.

Christchurch City Council said more than 1,800 hectares (4,500 acres) of land had been torched in the Port Hills, an area of rugged terrain difficult to access to the east of the city centre.

About 1,000 people had been evacuated and, with winds forecast to pick up and fan the flames, authorities warned residents to flee at the first sign of danger.

"We understand it's hard for people to leave their homes but the fire can change direction and move incredibly quickly," police senior sergeant Ash Tabb said.

"If you're worried, don't leave it too late -- it's better to be safe than sorry."

With a thick pall of smoke hanging over Christchurch, residents with respiratory ailments were advised to stay indoors.

Wildfires of such ferocity are rare in New Zealand, where regular rainfall usually prevents them reaching the intensity seen in places like Australia and the US west coast.

Prime Minister Bill English took a helicopter flight over the disaster zone on Thursday and said the blazes may have been deliberately lit.

"I've only had a very brief description of the fire starting in two places at about the same time, which to me looks suspicious," he told reporters.

"But those investigations are underway."

The emergency has so far claimed one life, when a helicopter that was dumping water on the flames crashed Tuesday and killed pilot Steve Askin, a decorated special forces veteran.

Civil Defence said it had confirmed 11 homes had been razed but added the situation was constantly changing.

It said 14 helicopters and three planes were helping battle the blaze, the maximum number of aircraft that could safely operate around the fire-front at one time.

Some 200 firefighters were operating about 45 pumps and tankers on the ground, with police and the military also providing additional personnel for the emergency response.