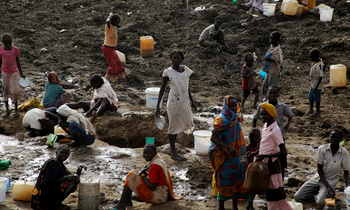 Forced evictions are at the heart of most African land disputes, and local anger over those displacements threatens investment across the continent, a report said Thursday.

A joint analysis conducted by consultancy firm TMP Systems and the US-based Rights and Resources Initiative found that 63 percent of land disputes focussed on cases of people driven off their land, often to make room for private development projects.

The report paints a picture of similar patterns of conflict over land across the continent, but with differing resources at stake for landowners.

In west Africa, plantation agriculture, especially palm oil, is driving many disputes, while in east Africa land has been seized for large-scale infrastructure and energy projects caused tensions.

Alioune Gueye, President of the Federation of Peasant Landowners in Senegal, was quoted in the report saying that "companies feel they can cut a deal with the government, raze the land, and create vast plantations while the locals are simply pushed out of the way."

But he underscored that a deeper sense of urgency was required to address rural poverty "before the anger and the distrust gets out of hand and converts into political disruption."

"African governments are competing for investment to spur economic development and improve living standards," especially from foreign sources, he added.

The report, released in Dakar, also characterised land disputes as arising in areas with a population density twice as high as the world average. They tended to be close to national borders, far from the central government base, and home to poor and underfed people.