Until now data has in large part been manually compiled from local stations. 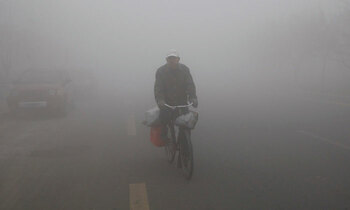 China has established a single network to monitor air pollution levels across the country, as the government attempts to control the spread of information about the country's toxic smog in response to rising public anger.

Until now data has in large part been manually compiled from local stations, but the national network will now track pollutants using a combination of manual sampling stations, satellite sensing and airborne platforms, the People's Daily state newspaper reported on Tuesday.

"Though data collected by ground base stations can be manually forged, real-time satellite data cannot be changed," He Kebin, a Tsinghua University professor, told the paper.

The network's creation coincides with government efforts to suppress reports about the country's choking pollution, which afflicts most major cities.

According to the China Digital Times, this week authorities directed all Chinese websites to "find and delete" a two-year-old story from The Paper, a Shanghai-based digital news site, about pollution's health risks.

On Wednesday, a link to the story was being circulated on Chinese social media, but clicking on it redirected to a page saying it was "already offline."

The microscopic particles are linked to higher rates of chronic bronchitis, lung cancer and heart disease.

Measures of the toxin in Chinese cities regularly exceed the World Health Organization's recommended safe limit of 25 micrograms per cubic metre of air, often by as much as ten times.

The study contradicts a statement made last month by a National Health and Family Planning Commission official, who told the Economic Daily that "it is too early to make conclusions about the health consequences of smog, particularly long-term".

While national pollution levels have been falling over the past few years, heavy smog this winter -- and the accompanying alarm -- have brought renewed urgency to the issue.

The Chinese government has tried to quiet some of the public reaction.

Last month, a 29-year-old Chengdu man was detained for five days by local police after he allegedly spread rumours about the smog levels, the Chengdu Commercial Daily reported.