Brian Bagyenda, 29, is alleged to have killed his girlfriend at his home. 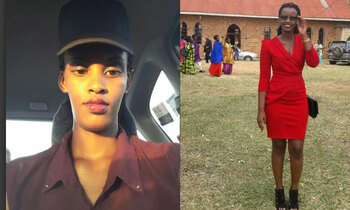 The police are investigating a lead that the prime suspect in the murder of university student Enid Twijukye could have been driven by jealousy to end her life.

Brian Bagyenda, 29, is alleged to have killed his girlfriend at his home in Luzira, a city suburb on January 5, under suspicion that she was having another affair.

Understood to be a practicing pharmacist, the suspect was reportedly aided by his two shamba boys (Vincent Rwahire and Innocent Bainomugisha) to snuff out his lover.

The victim, aged 22, was a second year student at Ndejje University pursuing a Bachelor's degree in International Business.

Deo Ebong, the regional CID officer (Kampala East) who on Tuesday received a copy of the postmortem report from Mulago Hospital, said he was working around the clock to ensure that the suspects are taken to court this week.

He however did not discuss details of the postmortem report as he was on his way to meet the Resident State Attorney over the matter.

"What I can say is that the suspect will appear in court today (Wednesday). As of the postmortem report, wait until we carry out a sanction," said Ebong.

Sources also revealed that a special hire driver suspected to know about the couple has also been arrested to help with police investigations.

"The special hire driver was hired by Brian to transport Enid and her friends to the village (Kiruhura) on Christmas day. Both were initially meant to travel together but because Enid was in the company of her friends, he opted to remain behind," said a detective.

Asked whether a medical examination had been carried out on Bagyenda, another source the New Vision interviewed responded in the affirmative, adding that he was of sound mind.

Police on January 13 discovered the body of the deceased in Namanve forest reserve and took it to the city mortuary in Mulago hospital. Our source said the body had started decomposing from the head.

Whereas Bagyenda thought their relationship was "in the heat of the moment", Twijukye "changed her character", prompting their clash.

Although Enid is already laid to rest in peace at her ancestral home in Kazo sub-county Kiruhura district, her family is not at peace. They want justice for their daughter.