The global climate change, environmental degradation and the dry spell have accelerated the rate at which water volumes in lakes are reducing. 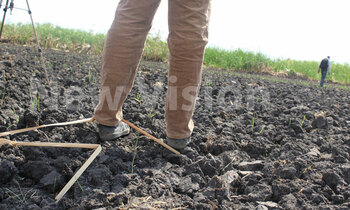 A man stands in the space that was originally covered by water. (Pictures by Pascal Kwesiga)

Dressed in a soiled T-shirt and a white pair of trousers, John Byansi cuts a figure of a typical small-scale Ugandan farmer in the countryside. His trousers are ripped around the knees, with the lower part on the verge of falling off.

But standing on the edge of what was a shoreline of Nyaguwo Lake in Opeta village, Pallisa district five years ago, Byansi, a fisherman, looks happy. He smiles from ear to ear. In his foreground are freshly tilled fields and a rice garden.

A group of children are playing about in the wreckage of wooden fishing canoes which were abandoned by fishermen when the lake's shoreline started receding. It is just over five years since the fishermen first noticed that the edge of the water in the lake in Gogonyo sub-county was receding.

Today, the distance between the edge of the lake and its former shoreline is over 5km. The space between the point where the current edge of the lake is and the old shoreline has been reclaimed by farmers for cultivation. Some people have built homes on land that was once under water. It looks like in a few years' time, the former fishing grounds will be densely populated by humans.

"The speed at which the lake's shoreline is receding increases in the dry spells," Byansi says.

Byansi, who is also a pastor at Pentecostal Revival Ministries church in Nawampiti village, Kaliro, a district separated from Pallisa by the shrinking lake, has been leading Christians in special prayer sessions dedicated to reversing the trend the water body has taken.

"We are worried because we are losing our source of livelihood as the lake recedes. We have been praying almost every Sunday, asking God to give us more rains so that the water level in the lake can rise again," he said.

"We think God is not happy with what we are giving back to Him or He is angry with us for the sins we have committed. But we will continue to pray."

What Byansi and his fellow church members as well as village mates do not seem to understand is the impact of their farming activities on the edge of the lake. Indeed, the areas around the lake have been receiving rains over the past five years, but the lake's surface area has been shrinking continuously.

"Some people have said it is the farming activities responsible for the reducing water levels. But they are forgetting that we have not had rains for over two months now. It is simply the absence of rains," Karim Zebandula, 20, a resident of Opeta village, opines.

Before the fishermen noticed that the lake's surface area was shrinking, there are families that cultivated crops up to the shoreline of the lake.

The soil from their crop fields was washed into the lake by rain, which resulted in silting of the lake, and gradually, parts of the lake dried up as its surface area reduced. As the lake's edge receded, the fishermen also shifted the landing sites to the points where the shoreline stopped.

And it is not Lake Nyaguwo alone that has receded in the eastern district of Pallisa. Lake Lemwa in Kasodo sub-county has so far receded by over 50 metres.

The surface area of Lake Kawi in Apopong sub-country has also reduced by over 50 metres in the last two decades, according to the 2016 study by the National Fisheries Resources Research Institute (NaFIRRI).

The farmers' activities have interfered with the flow of the Namatala-Mpologoma river system that drains the lakes in Pallisa before joining Victoria Nile. The river flows from the lower Elgon area. The NaFIRRI study also involved Lake Wamala shared by the districts of Gomba, Mityana and Mubende in central Uganda.

Over years, the study stated, the wetlands around the two shallow lakes (Wamala and Kawi) have been receding as communities encroached on riparian zones and, in some cases, cultivated up to the shoreline.

The study attributed the problem partly to increasing temperatures. Due to large-scale changes in Lake Wamala, the United Nations Environment Programme (UNEP) has designated it (Wamala) as one of the climate change hot spots in Africa.

The global climate change, environmental degradation and the current prolonged dry spell, which has been experienced in Uganda for the last six months has accelerated the rate at which water bodies are receding.

The NaFIRRI study noted that the changes in Lake Wamala mirror the situation in East African Rift Valley lakes such as Edward and Albert in Uganda because they receive most of their water from direct rainfall and lose most of it through evaporation.

There are fears that if the rate of water loss from Lake Wamala attributable to evaporation continues to exceed water input from direct rainfall, any period of lower than average rainfall will be followed by a corresponding decrease in lake depth and surface area.

About 10 years ago, the Ministry of Water and Environment fixed three concrete pillars in Lake Wamala, with a distance of about 10 metres between each other, to monitor changes in water level.

Today, the shoreline is metres away from the three pillars.

Ali Sekiwunga, who has been fishing in Lake Wamala for the last 35 years, says the water level started receding about 10 years ago, and that it (water) does not reach the original shoreline even in times of heavy rains.

The level of water in rivers - Pamujugu, Kabiruku, Nyanzi, Tyabira, Bimbye and Kabasuma - which drain the lake has drastically reduced in the current dry spell. Nowadays, traders have to wait at landing sites for fishermen to return from the fishing expeditions to buy fish.

"I came here (Katiko landing site on Lake Wamala in Mityana district) at 7:00am, and it is 12:00pm but I have only bought fish worth sh30,000. I am going back with the rest of the money because there is no fish," Fred Sserugera, a trader, says.

Bosco Kigozi, another trader in Mityana town, says: "These days, you have to place your order for fish (from Lake Wamala) a day earlier. We are buying fish expensively and have to sell it at high price to get a profit."

The lakes in Pallisa and other parts of eastern Uganda drain Lake Kyoga and Victoria Nile, where the Government is currently building the 600MW Karuma and I83MW Isimba hydroelectricity power dams.

For the last five years, residents of Pallisa town have not had running water because the Lake Lemwa water pumping station closed down as water in the (lake) receded.

The National Water and Sewerage Corporation (NWSC) facility could not operate because its pipes which had been fixed in a swamp around the lake to deliver water to the purifying machines started sucking mud as water levels reduced.

Now, residents in the town buy a 20-litre jerrycan of water at between sh500 and sh1,000 from vendors who transport it to the town on trucks and motorcycles.

"The vendors set their prices, and we have to buy water because there is no alternative. I need more than five jerrycans of water per day," Grace Apio, who runs a restaurant in Pallisa town, says.

The farmers have planted rice, maize and potatoes in the swamps around Lake Lemwa. At Lake Kawi, a large part of land which was previously under water has just been tilled in preparation for planting.

Part of the remaining swamps around the lake which are the fish breeding grounds have just been set on fire by small-scale farmers, who intend to convert them into farmland. The receding surface area for lakes and crop cultivation in the breeding grounds has deprived the fish of its (breeding) areas.

Muhammad Samuka, the district natural resources officer, said people started cultivating areas around lakes about 10 years ago while the district environmental personnel gave the encroachers restoration orders in 2000 and 2009, and attempted to evict them from wetlands, but efforts were frustrated by politicians.

Joseph Gume, 66, a resident of Nakitende village, said Lake Lemwa's surface area started receding in the 1990s, when subsistence farmers began cultivating in the swamps around it.

"There is no fish in the lake, and it is drying up," he added, "Government should become serious and enforce the law on lakes."

The fish stocks are falling and lakes shrinking at a time when (fish) is the preferred source of proteins over red meat.

A kilogramme of Nile Perch which went for sh3,000 in the past four years, now goes for sh10,000 in several markets in Kampala.

A 3kg piece of tilapia fish which went for sh10,000 four years ago, now goes for sh30,000. Environmental laws bar people from settling or carrying out agricultural activities within 200 metres of the shorelines of lakes, but the legal requirement is largely unenforced.

According to Joyce Nyeko, the acting commissioner for aquaculture in the agriculture ministry, the water levels in the lakes have continued to recede in the current prolonged dry spell. " 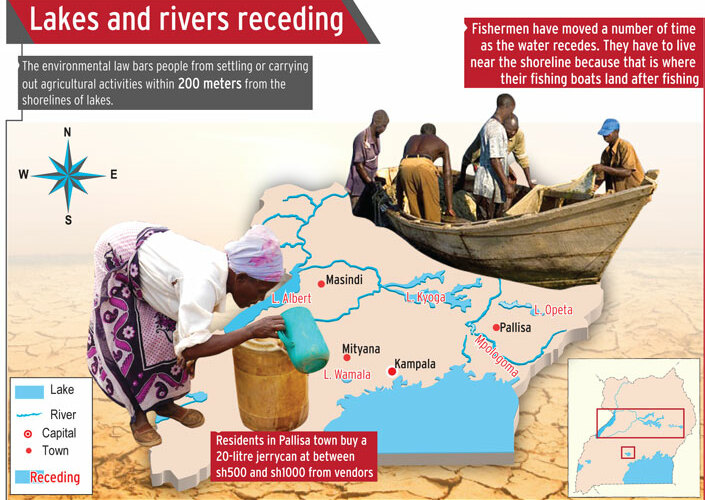 The cutting of trees in forests and converting wetlands into farmland has led to the silting of breeding grounds for fish and loss of water reservoirs for lakes."

The Ministry of Water and Environment has issued a four-month ultimatum to all encroachers to vacate the wetlands and catchment areas of lakes in eastern Uganda.

In Pallisa district alone in the eastern region, an estimated 2,600 farmers have encroached on the lakes' catchment areas and wetlands. The agricultural ministry has also resolved to gazette all fish breeding grounds for protection.

As part of the efforts to protect the country's water resource and forests as well as wetlands, the directorate of water in the Ministry of Water and Environment, has split the country into four water management zones - Albertine, Victoria, Upper Albert Nile and Kyoga to enhance protection and assessment of the water quality.

The water directorate boss, Florence Adongo, said they have worked with local governments to set up catchment management committees in various parts of the country to restore and prevent degradation of forests and wetlands.

But Dr Callist Tindimugaya, the commissioner for water resources planning and regulation, said there is need to provide alternative sources of energy to prevent the cutting down of trees for charcoal and improve the livelihoods of the people to reduce dependence on lakes and land for a living.