IGG will work despite parliamentary delays

"We are an independent body, we do not wait for parliament to investigate and produce its report." 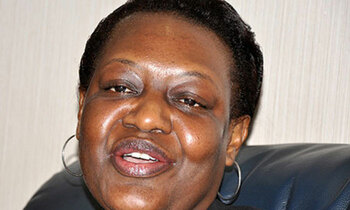 KAMPALA - The Inspector General of Government, Irene Mulyagonja (pictured) has said that parliamentary delays in responding to the audit reports will not deter her from carrying out her oversight role of investigating financial crimes and punishing the perpetrators.

"We are an independent body, we do not wait for parliament to investigate and produce its report. If we detect red flags, we shall act even if parliament quashes the audit report later," she said.

The IGG explained that the reason why they always delay to come up with their findings is because financial crimes are complex and committed in a syndicate manner, making it hard for them to pin only one person without the other.

"It is not easy to come up with a conclusion in syndicate crimes, one has to persevere, take time to examine documents and follow a long chain of leads before you connect the dots.  Most of these crimes are choreographed and it's hard to pin only one person."

Mulyagonja was speaking during the signing of a Memorandum of Understanding between the government inspectorate, the audit body and the procurement body in Kampala.

The three government bodies signed the MOU in order to form a syndicate against corruption.

She said that since most fraudsters act in syndicates, they have also decided to form a syndicate to counter them.

The MOU is a result of a 2014 German project headed by Sandy Richter aimed at promoting accountability and transparency in the country. The project was implemented by GIZ.

Richter said that initially they were working with only the Office of the Auditor General (OAG) but later decided to add the IGG and Public Procurement and Disposal of Public Assets Authority (PPDA) since the latter and OAG feed IGG with information.

According to Richter, their major objective was to increase accountability in the three institutions.

"Though these institutions shared information, they were not coordinating. So we came up with this MOU to ensure that they cooperate and work together to fight corruption," she said.

Carol Bonabona, a principle legal officer in the OAG, said that the MOU sets out the terms and conditions under which exchange of information amongst the three institutions will be facilitated according to their mandate, and the terms of corporation in regards to joint audits.

The MOU also states how monitoring of compliance and performance of the three institutions will be carried out and gives room for amendments in case there are changes in the law.

Mulyagonja said that by signing the MOU, they are stepping beyond the boundaries of the law which had confined them to only performing their mandate and though they shared information, could not talk to each other.

She said the agreement has made it easier for them to communicate faster and work together since they now know each.

"It gives us a greater impetus and confidence since we know the person who will respond to our information and respond quickly," she said.

Auditor General John Muwanga said the MOU is a step towards fighting corruption and enhancing accountability in government institutions.

He said that since the OAG feeds the IGG with information, they will be able to raise red flags in areas requiring investigations for her to act.

Cornelia Sabiiti, the PPDA executive director, said they have for long grappled with tackling some of the biggest financial crimes due to a rise in conflict of interest among people within, which leads to corruption.

Therefore the MOU will help them clear such corruption tendencies.