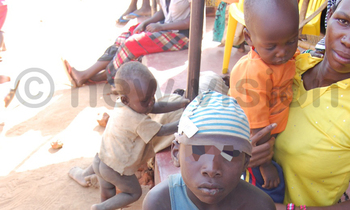 Two children have died following an outbreak of a strange disease in Kityerera Sub County in Mayuge district.

According to Wilber Kokoli, the area chairperson of Bukoba A and B landing sites, eight other people are in critical condition following the outbreak.

"So far two children have died and eight others are in critical condition" Kokoli said adding that the affected people experience body weakness, high temperatures and they pass out blood.

Edward Naguyo, the Mayuge district surveillance focal person said blood and stool samples have been taken from the victims. He added the stool samples were taken to Entebbe-based Uganda Virus Research Institute (UVRI) were they will be tested.

Naguyo said those suffering from the disease have been advised to seek medical intervention from health facilities. He said that the patients could be suffering from bilharzia.

"We have not yet confirmed the disease but investigations and monitoring is being carried out so that we establish the cause of the strange disease that killed 2 children" he said.

He noted that the patients have similar symptoms like those of bilharzia disease. He said that the disease could have been caused by drinking contaminated water which is normally drawn from Lake Victoria and ponds.

"My child started passing out blood. I bought him some drugs from the clinic but his condition couldn't improve until he died" Ketty Namukose.