In his latest early morning Twitter scree, the incoming president attacked Senate minority leader Chuck Schumer -- whom he has previously praised -- amid a mounting row over health care reform. 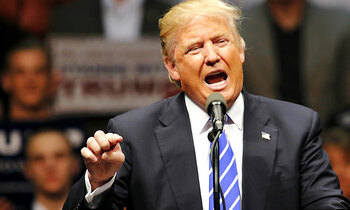 President-elect Donald Trump described America's leading Democrat as a "clown" who behaves like a typical politician, but urged him to work with Republicans Thursday.

In his latest early morning Twitter scree, the incoming president attacked Senate minority leader Chuck Schumer -- whom he has previously praised -- amid a mounting row over health care reform.

Republicans have vowed to press ahead with the potentially unpopular campaign promise of gutting President Barack Obama's signature legislation, the Affordable Care Act, which allowed millions more poorer Americans to get treatment, but has been criticized for raising insurance premiums.

But Republicans -- who control both houses of Congress and will take over the White House from January 20 -- appear uncertain about what, if anything, should replace Obamacare.

With the party taking a political hit for appearing adrift in the opening days of the new Congress, Trump pinned responsibility back on Democrats.

"The Democrats, lead by head clown Chuck Schumer, know how bad ObamaCare is and what a mess they are in," Trump said in a string of tweets that were at once strident and conciliatory.

"Instead of working to fix it, they do the typical political thing and BLAME. The fact is ObamaCare was a lie from the beginning. 'Keep you doctor, keep your plan!' It is time for Republicans & Democrats to get together and come up with a healthcare plan that really works -- much less expensive & FAR BETTER!"