Ivan Rogers' resignation and sharp criticism shed new light on the difficulties faced by Prime Minister Theresa May, who wants to hand in Britain's notice for withdrawing from the European Union by the end of March. 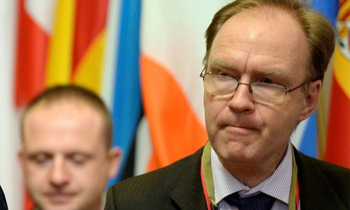 Britain's Brexit plans were in turmoil Wednesday after the UK's ambassador to the EU quit, blasting "ill-founded arguments and muddled thinking" less than three months before the process is due to start.

Ivan Rogers' resignation and sharp criticism shed new light on the difficulties faced by Prime Minister Theresa May, who wants to hand in Britain's notice for withdrawing from the European Union by the end of March.

The move to trigger the Article 50 mechanism would start a two-year clock ticking on sorting out future relations between Britain and the EU before it leaves the bloc.

Rogers said Tuesday he accepted his departure would add to the "uncertainty" over the coming years of Brexit negotiations.

May has faced criticism for saying little about Britain's divorce settlement objectives: last month she went beyond her "Brexit means Brexit" mantra to specify that she wanted a "red, white and blue Brexit".

And Rogers made clear that he knew little more about how Britain intended to tackle thrashing out its future relationship with the EU.

A highly-regarded diplomat who had been due to end his four-year stint in October, Rogers quit nine months early so his successor could see through the whole Article 50 process.

However, he left with some pointed remarks in his resignation email to staff at UKRep, Britain's EU embassy.

"We do not yet know what the government will set as negotiating objectives for the UK's relationship with the EU after exit," he said, revealing that UKRep were no clearer on the issue than what May has made public.

Rogers urged colleagues to provide British ministers with their "unvarnished" understanding through Brexit negotiations -- "even where this is uncomfortable".

"I hope you will continue to challenge ill-founded arguments and muddled thinking and that you will never be afraid to speak the truth to those in power," Rogers said.

He also criticised the British government for its short supply of "serious multilateral negotiating experience" in London and said the structure of the UK's negotiating team "needs rapid resolution".

Rogers came under fire last month for saying it could take 10 years for Britain to conclude a trade deal with the EU.

The government insisted, though, that he was only reporting back what was being said in European capitals.

The mild-mannered Rogers is widely respected in Brussels where he is known as a vastly experienced operator.

His critics say he is a europhile, but European diplomatic sources described him as being a realist.

British diplomatic sources at the time of the leaked "10 years" comments voiced suspicions that he may have been knifed in the back by pro-Brexit forces who wanted him out.

"We regret the loss of a very professional, very knowledgeable while not always easy interlocutor and diplomat, who always loyally defended the interests of his government," said Natasha Bertaud, a spokeswoman for the commission, the EU's executive arm.

'Massive' headache for May

The Daily Telegraph newspaper reported that May and her senior team had "lost confidence" in him over his "pessimistic" view of Brexit.

The unexpected departure "delighted Brexiteers but left the PM with a massive New Year headache", said The Sun newspaper.

The Guardian described it as "a blow for this country", while the choice of his successor would send a "critical" message to other European capitals.

London is set to appoint a new ambassador and deputy ambassador shortly.

"His resignation is not a surprise for those who work with him," one European diplomat told AFP.

"He was very competent, but not convinced by the Brexit decision and the British government line, leading the UK into an area of dangerous uncertainty."

In the June 2016 referendum, 52 percent voted for Britain leave the EU.

Triggering Article 50 will start a two-year countdown after which Britain will leave all the institutions and the single market unless alternative arrangements have been agreed.