On December 31, the two sides agreed that President Kabila would stay in power until elections are held at the "end of 2017". 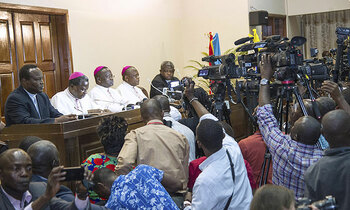 PIC: The President of CENCO, Archbishop Marcel Utembi, (C) and other Catholic bishops announces the agreement before the opposition, the presidential majority, civil society and dozens of journalists, at the inter diocesan centre in Kinshasa on January 1, 2017 following talks launched by the Roman Catholic Church between the government and opposition. (AFP)

Hopes are high that a landmark power-sharing deal between Democratic Republic of Congo's political opponents will bring an end to a months-long crisis.

The agreement aims to head off further unrest over the fate of President Joseph Kabila, whose second and final mandate ended on December 20 with no sign of him stepping down and no election in sight.

The deal, signed as the troubled country ushered in 2017, agrees Kabila may remain in office until elections at the end of the year.

A transition authority will be set up in the interim, headed by veteran opposition leader Etienne Tshisekedi, and a prime minister named from opposition ranks.

Following is a timeline of the crisis in the vast country of 70 million people:

Kabila's opponents believe he wants to prolong his mandate by making the presidential and parliamentary elections contingent on a new electoral roll, as a census set to begin in 2015 has yet to take place.

From January 19-22, clashes between police and anti-Kabila demonstrators erupt in Kinshasa and several other towns. They degenerate into riots and looting, with police using live fire and tear gas. Dozens are killed.

Speaking from Belgium, opposition leader Etienne Tshisekedi calls on the Congolese people to force a "dying regime" from power.

On January 25, parliament votes in favour of a new election law which still leaves doubts over the timetable for fresh polls.

In December, the United Nations expresses concern over a government crackdown on opponents, pointing to "arbitrary arrests and detentions, in particular of political opponents, civil society activists or demonstrators".

On May 4, 2016, opposition leader Moise Katumbi declares he will stand in the presidential election and is seen as the leading challenger to Kabila.

A former Kabila ally, the wealthy businessman joined the opposition in September 2015 after stepping down as governor of mineral-rich Katanga province.

Later in May, he leaves for South Africa, ostensibly for medical treatment, after appearing in court twice over alleged use of foreign mercenaries.

He is sentenced in June to three years in jail over a separate real estate dispute, effectively making him ineligible to stand.

On May 11, 2016, the Constitutional Court says Kabila can remain in office when his mandate expires, even without being re-elected.

On June 10, at a Brussels meeting organised by Tshisekedi, the mainstream opposition decides to set up a new coalition.

Tshisekedi returns to Kinshasa in July after two years in Belgium. Speaking before tens of thousands of supporters, he demands the election be held by year's end and Kabila's departure.

In September, the opposition coalition calls for demonstrations to signal notice to Kabila, three months before his term expires.

The protests were called by the Tshisekedi's opposition coalition, to coincide with the last three months of Kabila's term in office.

On October 17, the parliamentary majority and an opposition fringe minority sign an accord pushing the election back to April 2018 and keeping Kabila in place until his predecessor takes over.

The mainstream opposition continues to demand Kabila step down at the end of his mandate.

On December 8, Congo's episcopal conference CENCO launches talks aimed at a deal on setting up a transition authority until a presidential election can be held. It sets a December 16 deadline.

But that deadline came and went -- and on December 17, Catholic Church negotiators announced the talks would resume only a day after Kabila's term ends.

On December 12, the United States and the European Union impose sanctions on top Congolese officials over the bloodshed.

Deadly clashes erupt in Kinshasa and other cities on the last day of Kabila's mandate, December 20, leaving at least 40 people dead, according to the UN.

The CENCO-mediated talks resume late December and on December 31 the two sides agree Kabila will stay in power until elections are held at the "end of 2017".

During this 12-month period, a so-called National Transition Council will be set up, headed by opposition leader Tshisekedi, and a prime minister will be named from opposition ranks.