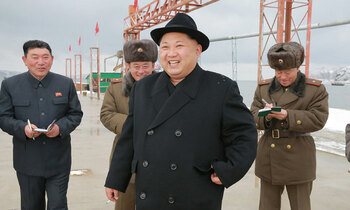 Top-ranking North Korean diplomat Thae Yong-Ho, whose recent defection gifted a major propaganda coup to the South, vowed Monday to devote himself to exposing the cruelties of the Pyongyang regime and encouraging others to escape.

South Korean lawmakers who met with Thae in Seoul told the Yonhap news agency that he had fleshed out his reasons for defecting and testified to the precarious lives of senior officials in the North and the "capitalist" survival techniques of ordinary North Koreans.

Thae was living in London as the deputy ambassador to Britain when he escaped to the South with his wife and two sons in August -- becoming one of the highest-ranking diplomats ever to defect.

The North's state media denounced him as "human scum", and accused him of embezzling state funds, raping a minor and spying for South Korea in exchange for money.

According to lawmaker Lee Cheol-Woo, Thae said he had become increasingly aware of the "gruesome realities" of North Korea under leader Kim Jong-Un and decided defection was the only option.

Thae promised to devote his life to "freeing the North Korean people from repression and persecution," Lee told Yonhap.

"I will engage in public activities even if it threatens my own safety," he quoted Thae as saying.

Intelligence agents who had been debriefing Thae since his arrival in Seoul told the lawmakers that he would be released from protective custody on Friday.

For all North Korean defectors, life in the South begins with intensive interrogation by the National Intelligence Service that can last for months and is aimed at weeding out possible spies.

Most are then sent to a resettlement centre for three months' training, after which they are free to start new lives in South Korean society.

Thae said life for high-level officials in North Korea could be extremely insecure, and it was perfectly normal for their homes to be bugged and monitored for any hint of disloyalty.

"The reason Hyon Yong-Chol was executed was because he said the wrong things at home," Thae was quoted as saying.

The NIS had previously suggested Hyon was purged and executed for dozing off during events presided over by Kim Jong-Un.

Thae also described how many ordinary North Koreans had taken to small-sized market enterprise to help feed themselves given the failures of the state food distribution system.

"Although North Korea is under a socialist system, it is basically running in a capitalist form," Thae was quoted as saying.

"Now, rather than relying on the party, people have learned many ways for survival on their own," he added.

Thae said more senior officials would defect from the North if they were less concerned about making a new life in the South, and urged Seoul to offer jobs and opportunities to encourage more to escape.

Rejecting the criminal charges Pyongyang levelled against him as "completely untrue," Thae told the lawmakers that he had balanced out his embassy account and taken a photo as proof in anticipation of future embezzlement allegations.