Arthur Blick opts for a buggy 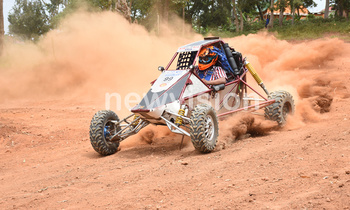 Former national rally champion, Arthur Blick Jr. has resorted to using a buggy after being let down by his Subaru Impreza N10.

Blick who won the NRC in 2015 but settled for third this season, disclosed to New Vision that he will be driving a buggy in the Champions Sprint at Festino City in Mukono on Boxing Day.

"I will be driving my Baraccuda and I dare those Bisodde (Mitsubishi Evo10) to register for the sprint and find out who is the best," Blick stated.

The Barracuda is the buggy car Blick built himself and he expects to beat his challengers.

The event closes the FMU calender and Ronald Ssebuguzi is leading the sprint championship with Jas Mangat and Duncan Mubiru yearning for the Sprint title too.