Electoral officers prepare the ballots and the boxes for the presidential election at a polling station in Kibi, southern Ghana, on December 7, 2016.  AFP PHOTO / CRISTINA ALDEHUELA Ghanians voted Wednesday in tight presidential and parliamentary polls that are seen as a litmus test of stability for Africa's most secure democracy as it wrestles with a stumbling economy and corruption scandals. Charismatic President John Mahama is running for reelection against veteran politician Nana Akufo-Addo, who has chipped away at the popularity of the ruling National Democratic Congress (NDC) party by criticising the country's sluggish growth and high-profile corruption scandals. 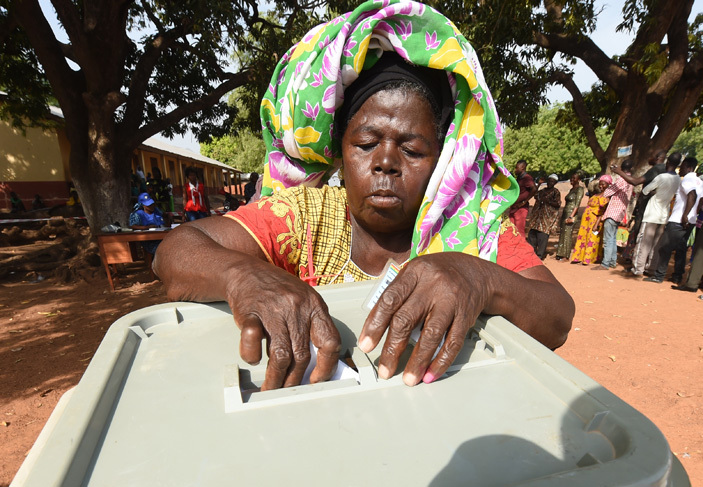 A woman votes at a polling booth as people wait in line in the Bole district, northern region, on December 7, 2016. AFP PHOTO / PIUS UTOMI EKPEI

There are some 15 million registered voters in this West African country, and polling stations opened at 0700 GMT.

The winner will serve a four-year term in a formerly booming country that has seen its economy slow, currency deteriorate and inflation soar.

An exporter of gold, cocoa and oil, Ghana was once hailed as a regional growth model but has now taken on too much debt, and in 2015 had to go to the International Monetary Fund for a bailout. 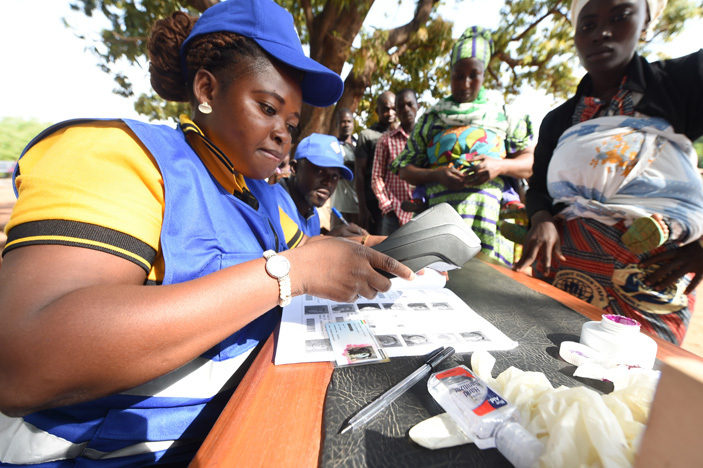 An electoral official uses a biometric machine to validate voter's card at a polling booth in the Bole district, northern region, on December 7, 2016.

'Mahama 'has done well for us'

"We are facing a lot of problems economically, everything is messy," Julie Amofah, 26, who voted in Kibi, a town 80 kilometres (50 miles) from the capital, Accra.

"I voted for change so we can move forward."

Shadrack Opoku, an 18-year-old high school student, said Akufo-Addo of the New Patriotic Party (NPP) is the "right person for our country" who can secure future growth. 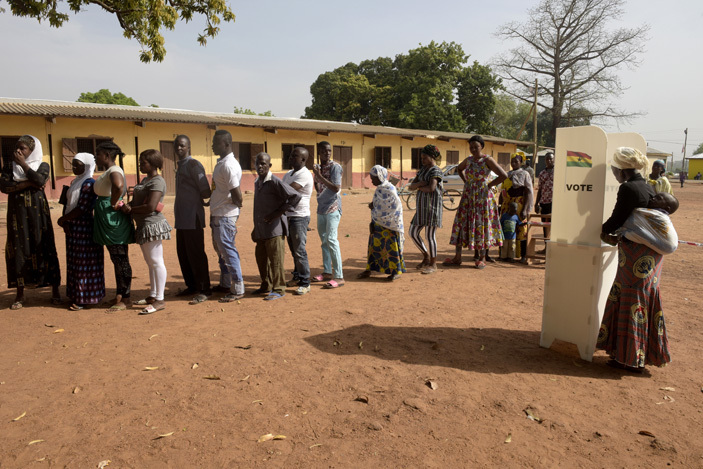 A woman votes at a polling booth as people wait in line in the Bole district, northern region, on December 7, 2016. AFP PHOTO / PIUS UTOMI EKPEI

"When we complete university, we want better jobs," Opoku said. "Right now it's not good."

There are seven candidates battling for the top job and if the smaller parties perform well and deny either man a majority, a run-off will be held later this month.

Mahama, 58, is seeking a second term, with Akufo-Addo, 72, making his third -- and likely final -- bid for the highest office.

In the final days of the campaign, Mahama flexed his significant resources to reach as many battleground regions as possible where he inaugurated blockbuster infrastructure projects, including railways and airports. 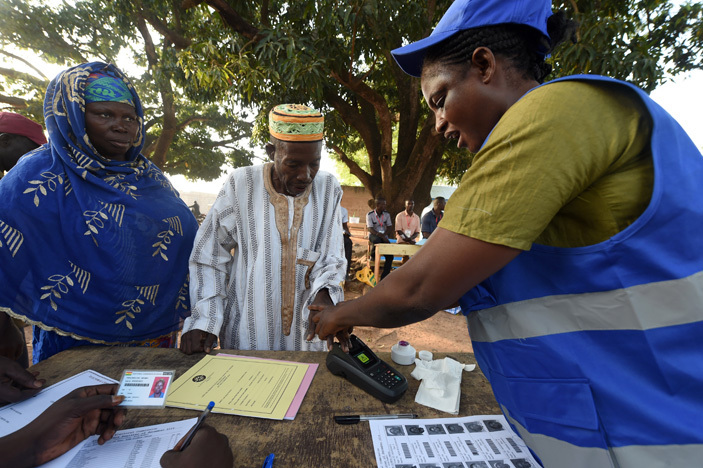 An official of the Electoral Commission (EC) helps a voter to do biometric verification before casting his vote for the presidential election at Bole district in northern Ghana, on December 7, 2016.

"Mahama has done well for us," said Abudula Alhassan a 40-year-old driver in the northern town of Bole, a government stronghold.

In contrast, Akufo-Addo has blasted Ghana's poor economic growth which stood at 3.3 percent in 2016 -- the slowest rate in two decades -- and has outlined detailed plans to get the economy back on track.

He has also lambasted Mahama's government over a series of corruption scandals in which scores of judges have been implicated. Critics say he squandered the country's commodity wealth and turned a blind eye to graft within his inner circle.

During his tenure, the Bank of Ghana controversially bought half a million dollars worth of gold Swiss watches for some of its staff.

Akufo-Addo has also alleged that the ruling party is fomenting violence, a claim Mahama denies. 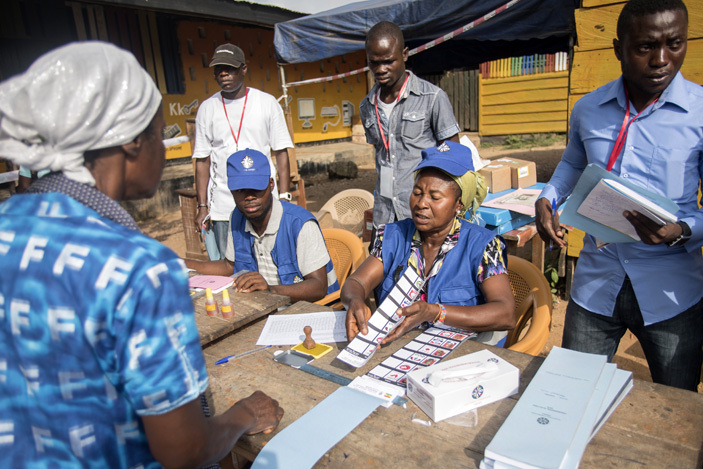 But ahead of the vote, tensions were building.

Police said an NPP supporter was beaten to death and six others were critically wounded during clashes on Monday between supporters of the two main parties following a rally in the north.

Elections in Ghana are famously close fought, with Mahama narrowly winning in 2012 with 50.7 percent.

But polls in Africa this year have been a mixed bag of surprising triumphs and sobering failures for democracy. 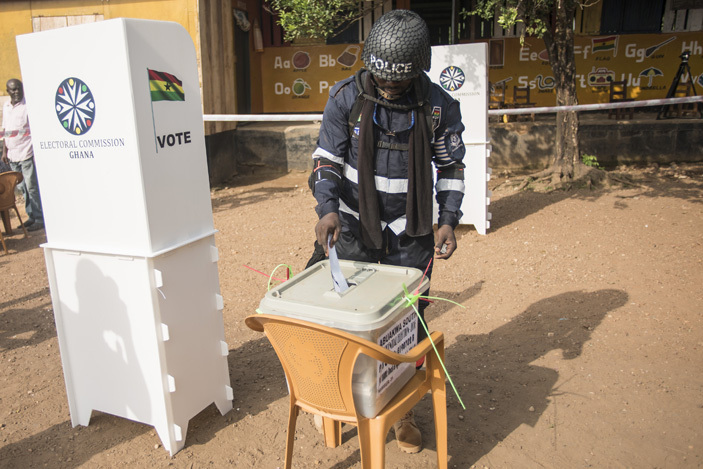 A policeman casts his ballot for the presidential election at a polling station in Kibi, southern Ghana, on December 7, 2016. AFP PHOTO / CRISTINA ALDEHUELA

In Gambia, a dictator of 22 years conceded defeat, while in oil-rich Gabon the Bongo family continued its 50-year reign after a disputed election. But Ghana is still seen as an example of peace and stability in West Africa.

Pollsters are divided in a country whose democratic credentials have come under scrutiny after criticism of its electoral commission following the 2012 elections.

Following the last elections in 2012, Akufo-Addo -- who polled 47.7 percent of the vote -- contested the results in Ghana's constitutional court, although he was ultimately unsuccessful.

Akufo-Addo, who said previously that he would accept the results even if he loses, added recently: "Those are hurdles we have to jump once we get there."