Farouk Miya scores a stunning goal to put the hosts in front. 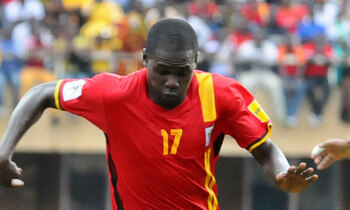 The Uganda Cranes have taken  a crucial lead into the break in their Group E World Cup qualifier against Congo Brazzaville at Namboole Stadium.

Belgium-based striker Farouk Miya made a thunderous dash into the area after a quick one-two to clinically put the ball into the back of the net in the 19th minute.

Earlier, home defender Murshid Juuko was forced off the pitch for medical attention after getting involved in a head clash with an opponent during a Congo corner kick.

He did not return and Luwagga Kizito was introduced in his place.

After getting the lead, Coach Micho Sredejovic's side grew in belief and confidence as they searched long and wide for a second goal.

As it stands, Uganda leads Group E ahead of Sunday's other group game between Egypt and Ghana.