The Democratic Alliance, the main opposition party, has tabled the no-confidence motion accusing Zuma of wreaking "havoc on our infant democracy". 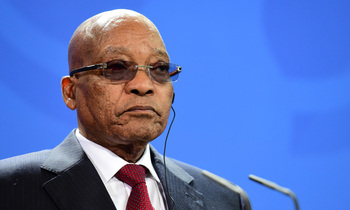 South Africa's scandal-hit President Jacob Zuma faces a no-confidence vote in parliament on Thursday, but looks certain to survive despite mounting anger within his party.

Zuma has fought off a series of damaging controversies during his presidency, and last week came under further pressure after a corruption probe raised fresh allegations of misconduct.

But the 74-year-old, who came to power in 2009, retains strong loyalty among ruling Africa National Congress (ANC) lawmakers and many party activists, particularly in rural areas.

The Democratic Alliance, the main opposition party, has tabled the no-confidence motion accusing Zuma of wreaking "havoc on our infant democracy".

"President Zuma's brand of corruption, economic mismanagement and lies can no longer continue to exist alongside the project of building a better South Africa," the party said in a statement.

The no-confidence vote will be the third in under a year, with the first two easily defeated by the ANC's majority in parliament.

The corruption report by the country's top watchdog raised accusations of possible criminal activity in Zuma's relationship with the Guptas, a business family accused of wielding undue political influence.

It included allegations that the Guptas offered Deputy Finance Minister Mcebisi Jonas a $44 million (40 million euros) bribe, which he said he refused.

But the ANC leadership scoffed at the no-confidence vote, describing it as "ritualistic" and "founded on spurious allegations and narrow political motives".

- 'More powerful than the ANC itself' -

The ANC, which has ruled since the first post-apartheid elections in 1994, has seen its popularity dive, with local polls in August delivering its worst-ever result.

Zuma's term in office ends in 2019, but the ANC is due to elect a new party leader at the end of next year and could then decide to replace him as head of state.

South Africa's highest court this year found the president guilty of violating the constitution after he refused to repay taxpayers' money used to refurbish his private rural house.

He is also fighting a court order that could reinstate almost 800 corruption charges against him over a multi-billion dollar arms deal in the 1990s.

Despite the groundswell of protest and deep divisions in the ANC, Thursday's vote in parliament poses no threat to Zuma, said Wits University professor Patrick Bond.

"The key people in the ANC are very supportive of Zuma," he said.

The Business Day newspaper described Zuma as "back firmly in the saddle" after surviving the latest storm of criticism.

"Zuma has grown bigger and more powerful than the ANC itself," wrote commentator Carol Paton.