The lecturers unanimously endorsed the decision to continue the strike 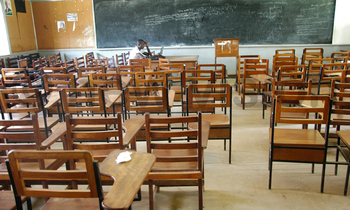 One of the empty lecture rooms at Makerere University as the lecturers' strike continued. Photo by Ronnie Kijjambu

During the general assembly of lecturers at the School of Education, they unanimously endorsed the decision to continue the strike in a move they said would solve Makerere's financial problems once and for all.

Dr. Charles Wana-Etyem, the University Council chairperson appealed to all lectures to observe and go by the resolutions made on Friday during the council's emergency meeting since the council acknowledged and was committed to pay the arrears but all was in vain.

MUASA general secretary Louis Kakinda said they have persistently given time to the council to sit and review allowances, but for three years they have failed to table the decision.

"We as MUASA, we have decided to continue with the strike until the university pays us for now nine months, from February to date and therefore the university should close so that re-structuring can be thought about" Kakinda said.