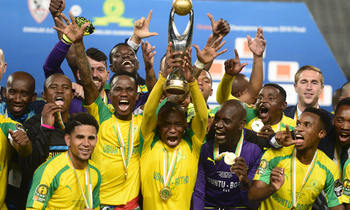 FUFA has announced that it will reward Uganda Cranes goalkeeper Denis Onyango with a land title following his exploits with PSL side Mamelodi Sundowns.

Onyango became the first Ugandan to win the CAF Champions League over the weekend and FUFA president Moses Magogo said that the player deserves to be appreciated.

Magogo however did not mention how much the land will cost or where it will be.

He said that the federation would hand over the title of prime land to Onyango during the Uganda Cranes' 2018 FIFA World Cup qualifier against Congo Brazzaville at Mandela National Stadium, Namboole on November 12th.

Mamelodi Sundowns won the continental title following a 3-1 aggregate defeat of Egyptian side Zamalek over the weekend in Alexandria.

"Rewarding Onyango is meant to encourage other players and all the people contributing to the development of football as well. This can also happen to anyone who stands out. It can be another football player, referee, administrator or any other person whose contribution stands out," Magogo said.

This comes after FUFA announced it would organize awards to recognize current and past footballers at the end of every year.

Farouk Miya and Sandra Nabweteme were voted as best players and each got a car.