The officers will be trained by officials from UPDF, Makerere University and UN 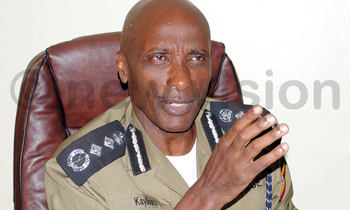 A total of 111 senior officers are currently undergoing training that will focus on command, leadership and supervisory skills at the Senior College and Staff Command in Bwebajja, Wakiso district.

Aimed at revamping Police's image, especially in operational skills, Kayihura told the officers undergoing training that the force is undergoing rectification. Those that have come with ‘wasi-wasi' literally meaning bias "should rest their minds and take the programme serious."

Kayihura requested the trainers, dons from Makerere University and United Nations, to formulate a module and teach his officers on public speaking.

"Teach them how to speak and the way one conducts himself when speaking in public" said Kayihura much to the amusement of the officers.

"Even I need to be guided. In public speaking one needs to be cautious on their breath and time," he said before declaring the course officially open.

The officers will be trained by officials from the Uganda People's Defence Forces (UPDF), Makerere University and the United Nations University for Peace during the one year course that will focus on command, leadership and supervisory skills.