The ceasefire had been intended to allow civilians and rebels to leave the east. 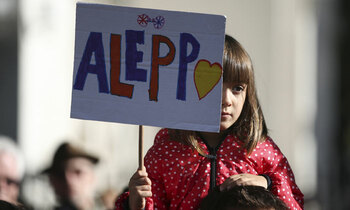 Clashes and air strikes shook the Syrian city of Aleppo on Sunday, leaving three civilians dead as heavy fighting resumed after the end of a three-day ceasefire declared by government ally Russia.

The unilateral ceasefire ended without any evacuations by the UN, which had hoped to bring wounded civilians out of the rebel-held east and deliver aid after weeks of government bombardment and a three-month siege.

An AFP correspondent in the east of the city reported fresh air strikes on rebel-held neighbourhoods and the sound of fighting on Sunday.

The Syrian Observatory for Human Rights said strikes and artillery fire hit eastern districts after heavy clashes overnight along the front line dividing the city's government-held west from the east.

The Britain-based Observatory said at least three civilians including a woman and a child were killed in rocket strikes targeting a rebel-held area, warning that with several people wounded the death toll could rise.

Late on Saturday the Observatory reported the first air strikes since Moscow announced a temporary halt in the Syrian army's Russian-backed offensive to recapture the east of the city.

It said at least three people were wounded in artillery fire on the east, while rebels fired a barrage of rockets and mortar rounds into a government-held neighbourhood.

The ceasefire had been intended to allow civilians and rebels to leave the east.

The army opened eight evacuation corridors, but only a handful of civilians were reported to have crossed through a single passage.

Nearly 500 people have been killed and more then 2,000 wounded since the Syrian army launched an operation to recapture eastern Aleppo on September 22.

The United Nations had hoped to use the "humanitarian pause" to evacuate seriously wounded people and possibly deliver aid.

But a UN official said on Saturday that security guarantees had once again not been received.

No aid has entered Aleppo since July 7 and UN chief Ban Ki-moon has warned food rations will run out by the end of the month.

The UN had asked Moscow to consider extending the pause until Monday evening, but there was no indication from Russia that it would.

Russia is a key ally of Syria's government and began a military intervention in support of President Bashar al-Assad in September last year.

Kremlin spokesman Dmitry Peskov said in an interview aired on Saturday that the intervention was meant to "liberate" Syria and keep Assad in power.

"Either Assad is in Damascus, or Al-Nusra is," he said, referring to Fateh al-Sham's name before it broke with Al-Qaeda. "There is no third option here."

Elsewhere, at least two people were wounded on Sunday when a bomb strapped to a motorbike exploded in the northeastern city of Hasakeh, the Observatory said.

The blast in a Kurdish-controlled district is one of a series to have hit the city, most of which were claimed by the Islamic State group.

More than 300,000 people have been killed in Syria and more than half of the country's population displaced since the conflict began in March 2011 with anti-government protests.

French Foreign Minister Jean-Marc Ayrault on Sunday urged the international community to "do everything" to end the "massacre" in Aleppo and resume efforts to reach a political agreement.

Ayrault also reiterated a demand for a UN Security Council resolution condemning the use of chemical weapons in Syria and "sanctions" against the perpetrators, after UN experts said the army was responsible for a chemical weapons attack in March 2015.

On Saturday, the White House condemned the Syrian regime's "defiance" of international law after a UN panel attributed a third chemical weapons attack to government forces.

"We condemn in the strongest possible terms the Assad regime's defiance of the longstanding global norm against chemical weapons use," said US National Security Council spokesman Ned Price.