The ban has been declared "unconstitutional and void". 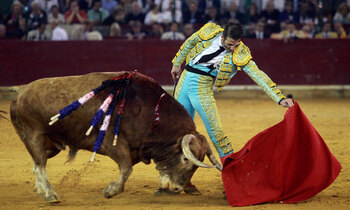 Spain's Constitutional Court on Thursday cancelled a bullfighting ban in Catalonia in what is likely to exacerbate tensions between Madrid and the separatist region, and drew an outcry from animal activists.

The decision represents a significant victory for supporters of the centuries-old tradition who have long sparred with animal rights organisations that believe bullfighting is a cruel, anachronistic event.

In a statement, the court argued bullfighting was classified as part of Spain's heritage, and therefore a decision on banning it was a matter for the central government and not for semi-autonomous regions.

The ban has been declared "unconstitutional and void," it said.

Catalonia's regional parliament voted to abolish bullfighting from January 1, 2012 after animal rights groups managed to garner 180,000 signatures for a petition.

It was the first region in mainland Spain to ban the tradition, although the Canary Islands abolished bullfighting in 1991.

Critics at the time argued that more than an animal rights issue, Catalonia's ban was also politically-motivated in a region with its own language, a fierce sense of identity and a desire to seek independence from Spain.

As such, the court decision is likely to increase already-high tensions between Madrid and Catalonia, where the regional government is making moves to separate from Spain and has announced a referendum on the issue next year.

It drew immediate reactions from politicians on both sides of the divide.

"In the Spanish state, it's unconstitutional to ban the public torture and murder of an animal. Enough said," tweeted Gabriel Rufian, a Catalan separatist lawmaker in national parliament.

Meanwhile Alicia Sanchez-Camacho, president of the Catalan branch of the ruling conservative Popular Party that took the ban to court, said she "welcomed" the decision.

She tweeted that the party would "continue to defend" freedom and bullfighting.

Even animal rights party PACMA criticised the decision as politically-motivated.

"Once more they have been found to use animals in a political war," said party member Ana Bayle.

"They don't know anything about animals, nor do they care."

The debate does not only touch on Spain's fraught issue of regionality.

Bullfighting has drawn increasing controversy and protests around Spain in recent years.

While no other region has banned bullfighting since Catalonia made the move, Castile and Leon in Spain's northwest abolished the killing of bulls at town festivals in June.

The move targeted the region's controversial Toro de la Vega festival where horsemen chase a bull and spear it in front of onlookers.

Several cities have also put a stop to corridas or annual festivals with bull running over the years.

But supporters of bullfighting, known as "aficionados", are not giving up without a struggle.

They see bullfighting as an art that is an integral part of Spanish culture, like flamenco.

Spain's first pro-bullfight lobbying group, the Bull Foundation, made up of breeders, matadors and "aficionados", also argues that it is beneficial for the economy, maintaining around 200,000 jobs directly or indirectly.

Simon Casas, a former matador whose company now manages bullfighting rings in Madrid and other Spanish and French cities, welcomed the court decision.

"Bullfighting is a form of culture under supervision of Spain's culture ministry, it's an art form that is part of the identity of some people and it was totally absurd that a political institution -- the Catalan government -- was able to ban it," the Frenchman said.

"The debate wasn't about liking or not liking bullfighting, being for or against it, it was a constitutional issue and the court sorted it out."

Other controversial traditions involving animals, such as throwing a live goat off a tall church steeple to a crowd below, have also been banned over the years.

But others continue to take place, such as placing flammable balls on the horns of bulls, setting them on fire and letting the animals loose in the street.