"He collapsed and later died while being worked on at Kamuli hospital." 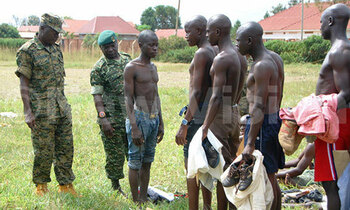 KAMULI - The Uganda People's Defence Force (UPDF) recruitment exercise was interrupted after a potential recruit collapsed and died during a physical fitness test at Kamuli Boma Ground on Monday.

Twaha Tondwa, a 22-year-old from Butebo sub-county in Pallisa District, came for the recruitment exercise under the Kaliro batch.

The recruitment attracted candidates from Kaliro, Buyende and Kamuli district.

The commander of Team 5 in charge of recruitment, Colonel Stephen Mugerwa said that efforts to save Tondwa were not successful after he collapsed and later died while being given medical attention at Kamuli General Hospital.

"Tondwa had a medical form recommending him for the exercise but unfortunately after the road run to test body fitness, he collapsed and later died while being worked on at Kamuli hospital," said Mugerwa.

Kaligo Wawere, who escorted his son for the recruitment exercise from Palisa district, said when they left home in the wee hours of the morning, his son was fine but was shocked when his son collapsed.

"I don't know what happened but when we left home in the morning my son was fine. I think it was God's plan," said the visibly stunned father.

Meanwhile, Mugerwa refuted claims suggesting that the training was hard for first-timers and hence the cause of the death.

"For this exercise, we emphasized physical fitness but I think some candidates underestimated our call and the intensity of the physicals."

Physical fitness tests included road runs but press-ups were not done after the fatal incident.