The attack follows the kidnapping of a US aid worker Friday, the first American captured in the west African nation. 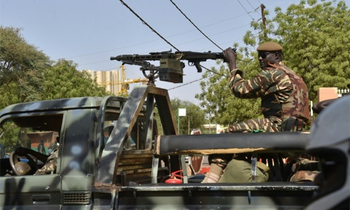 Armed forces in Niger repelled a pre-dawn attack Monday on a prison where "terrorists", notably from neighbouring Mali, are being held, the country's interior minister said.

Mohamed Bazoum said the prison in Koutoukale, about 50 kilometres (30 miles) northwest of the capital Niamey, came under attack at 4 am (0300 GMT). "The enemy was repelled, leaving behind several dead wearing explosive belts," he said on social media.

The attack follows the kidnapping of a US aid worker Friday, the first American captured in the west African nation.

The prison in Koutoukale is considered to be Niger's most secure jail, holding the country's most dangerous detainees, and notably jihadists from groups active in the Sahel desert area and from the Nigeria-based Boko Haram Islamist group.

"Heavily armed terrorists again attacked this high security prison. They were unable to get near the jail because a gunfight broke out with soldiers who are guarding it," a source in the security services told AFP.

On October 30, 2014, an armed group set several detainees free when they attacked a jail at Ouallam, 100 kilometres north of Niamey.

The civilian prison in the capital itself was attacked in June 2013 by an armed group, leaving at least two warders dead. The assailants made off with 22 "terrorist" prisoners, including Boko Haram fighters.

They also freed a high-profile criminal from Mali, Cheibane Ould Hama, who had been convicted of the murders of four Saudi Arabian nationals near Niger's border with Mali, as well as killing an American in Niamey in 2000.