In terms of completion rates, Moroto scored best, followed by Mitooma, Kampala, then Bukwo again; in the same order. They are followed by Butambala and Wakiso. 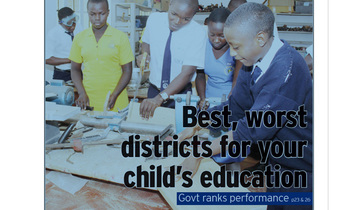 A new research released by the education ministry shows that Mitooma, Bushenyi, Sheema, Mbarara and Luweero are the best performing districts in the country's education; at all levels.

The other best performing districts, in a hierarchical descending order, are Ntungamo, Kabale, Kalungu and then Butambala.

The analysis ranked 112 districts of the country, from the best to the worst.

The research by Ministry of Education analysts considered three parameters: the performance index, which is the measure of the quality of passing at all levels of education, the net intake ratio, which is the number of new entrants of official age into schools and the completion rate, which is the total number of pupils or students who registered for the end of the cycle exams, regardless of age.

Though Mitooma is the best overall, there are other districts that top each of the given scores.

For example the best district in the Net Intake Rate is Butaleja, followed by Bushenyi, then Mitooma, Butambala and Bukwo in the fifth position.

In terms of completion rates, Moroto scored best, followed by Mitooma, Kampala, then Bukwo again; in the same order. They are followed by Butambala and Wakiso.

In regard to the Performance Index, Kampala district is the best, followed by Mbarara, Kabarole, Rubirizi and Bushenyi.

Amidst the rhetoric of poor quality education, how do these schools excel; with most of them having an average score of over 70%? Get the details in our education pull-out (Mwalimu) in New Vision today or subscribe for the epaper

Also in Mwalimu are the following:

Use sports, music to shake off exam stress

As national examinations start around the country, some of the students tend to fall sick. But at times, it's just stress. Dr. John Muyingo, the state minister for higher education; gives you tips on how to swerve perfectly out of this examination period.

There is sibling rivalry. We've all probably dealt with it. What takes us by storm is when children actually begin to hate each other and say or do hurtful things to the sibling they loathe. What do you do as a parent, when that happens? Our parenting counselor Bob Kisiki has the right answers.