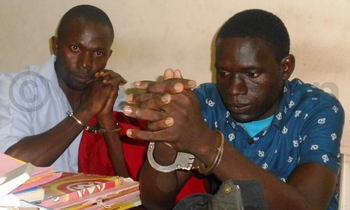 The chief magistrate's court in Jinja has for a second time denied bail to two members of the Jobless Brotherhood who branded Speaker of Parliament Rebecca Kadaga a pig.

They are Augustine Ojobire the eastern coordinator and Robert Mayanja the deputy national coordinator of the group.

During a court session presided over by John Frances Kaggwa they were denied bail until 10th Oct this year.

In his ruling Kaggwa said that he had clearly read the documents presented to court by the sureties and those of the accused but were not enough to be used to grant them bail.

"I have critically read all documents presented to me before court, however just saying you are residents of the mentioned places doesn't prove to this court that you have permanent places of board/residence where once granted bail can easily be followed," he said.

Kaggwa also cited the failure by the duo to make statements at Jinja Central Police Station after arrest. He advised that if they are not satisfied with the ruling, they should appeal in the High Court.

"If anyone is not satisfied with my ruling then you should make an appeal in the High Court" he stressed.

The duo is facing charges of inciting violence during a radio talk show on NBS Radio found in Jinja district.

He said they were not satisfied with the ruling and that they are going to consult with their lawyers and make an appeal.

"These jobless youths have a right to get bail, I have failed to understand why the magistrate has refused to grant them bail yet they produced valid documents and those of the sureties" he said.

He accused the Judiciary of being compromised by a group of politicians who support the way Parliament spends taxpayer's money.

He added that they will not stop at advocating for people's rights.