Beware the air we breathe

Chronic exposure has been linked not only to respiratory ailments, but also cancers, heart disease and stroke. 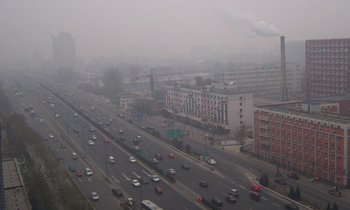 Health-damaging atmospheric pollutants, which the World Health Organization warned Tuesday affected nine out of every 10 people, originate mainly from industry, heating and transport.

Chronic exposure has been linked not only to respiratory ailments, but also cancers, heart disease and stroke.

These are microscopic particles generated by coal, oil and forest fires, but also by natural sources such as volcanoes and dust storms.

The building-blackening particles are so light they float on air. Some are so small they can penetrate deep in the lungs and even cross into the bloodstream.

The components include sulphate, nitrates, ammonia, sodium chloride, carbon and mineral dust. They may also carry traces of heavy or toxic metals such as arsenic, cadmium, nickel and mercury.

PM is divided into two categories: PM10, which comprises particles between 2.5 and 10 thousandths of a millimetre, or micrometres; and PM2.5, which is smaller than 2.5 micrometres -- about a 30th the width of a human hair.

PM2.5 is estimated to reduce life expectancy in the European Union by more than eight months, according to the European Environmental Agency (EEA).

Nitrogen oxides, poisonous gases that contribute to acid rain and suffocating smog, are found in the fumes of cars, trucks, tractors, boats and industrial processes such as power generation and cement-making.

They are composed of nitric oxide (NO) and a smaller percentage of more poisonous nitrogen dioxide (NO2).

Fossil-fuel burning is by far the main man-made source: cars, trucks, tractors and boats or industrial processes like power generation and cement-making.

In the stratosphere, this triple-atom molecule of oxygen is naturally occurring and protects us from the Sun's ultra-violet radiation.

But at ground level, where it is formed in a chemical reaction between sunlight and exhaust gases, ozone is a component of photochemical smog.

Other concerning pollutants include sulphur dioxide (SO2) released by coal and petrol combustion, ammonia (NH3) gas released by farm fertilisers, and carbon monoxide (CO) from burning gas, wood or charcoal, as well as heavy metals such as lead, cadmium, nickel, arsenic and mercury emitted by industry.

SOURCES: WHO, EEA, International Agency for Research on Cancer (IARC)