The Ssezibwa regional spokesperson SP Lamek Kigozi said the theft of the trailer with its cargo of cement was plotted in Magamaga village, Jinja district.

Police in Njeru are holding three men and a lady over theft of 620 bags of cement and a trailer Scania, registration number UAS487B with its carrier number UAD984L.

The four who were arrested after Bob Bwebale, a businessman reported the theft of his cement he had just bought from the Tororo cement factory.

Bob Bwebale told police that on September 10, this year he bought 620 bags of Tororo cement from the factory and gave them to a trailer driver known as Martin Tilulaga whom he didn't know was a high way robber. 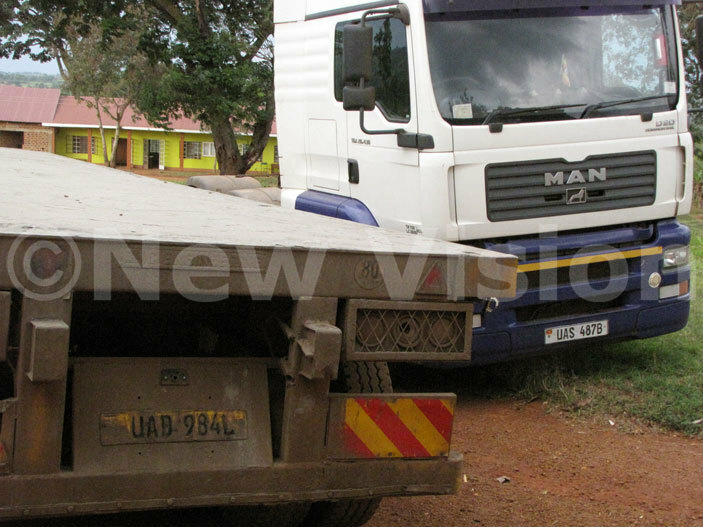 The vehicle and its carrier

Police started the hunt for the vehicle and its goods. The vehicle was recovered in Namiyagi village in Wakisi division, Buikwe district.

But the vehicle was found without the cement load. Four people who are suspected to have had a hand in the theft of the cement and the trailer were arrested from Wakisi, Kizungu and Mbiiko centers.

Police also recovered 100 bags of cement from the homes of the suspects.

The Ssezibwa regional spokesperson SP Lamek Kigozi said the theft of the trailer with its cargo of cement was plotted in Magamaga village, Jinja district.

Lamek Kigozi said when the vehicle reached Njeru at the Nile junction; the thieves took off with the vehicle towards Kayunga road where they offloaded the cement.

Martin Tilulaga, the driver of the trailer said he had entrusted the vehicle to a friend who was involved in the theft.

The Police said they tracked the vehicle using the global positioning system (GPS).