The pair were due to meet in the Lao capital of Vientiane at a gathering organised by the ASEAN. 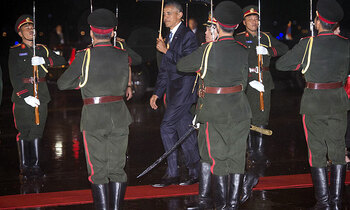 US President Barack Obama cancelled a meeting with foul-mouthed Philippine leader Rodrigo Duterte on Tuesday at a regional summit where tensions over China's growing territorial ambitions are also set to flare.

The pair were due to meet in the Lao capital of Vientiane at a gathering organised by the Association of Southeast Asian Nations, an annual event meant to foster harmony but which often highlights regional rows.

This year's edition was launched with a spectacular fallout between the United States and the Philippines, longtime allies that have seen relations plunge under a barrage of insults from Duterte since he came to office on June 30.

Obama's aides announced before dawn on Tuesday that his planned meeting later in the day with Duterte had been called off.

"President Obama will not be holding a bilateral meeting with President Duterte of the Philippines this afternoon," National Security Council spokesman Ned Price said in Washington.

This came after Duterte launched a tirade at Obama on Monday as he warned he would not be lectured by the US president over concerns about a brutal war on crime in the Philippines that has claimed more than 2,400 lives.

"You must be respectful. Do not just throw away questions and statements. Son of a whore, I will curse you in that forum," Duterte told reporters when asked about his message for Obama.

Duterte had previously also branded the US ambassador to Manila a "son of a whore", a term the acid-tongued former prosecutor commonly uses, and criticised the US over its own track record of police killings.

The setback in relations between the United States and the Philippines comes at a crucial time in the region, with China seeking to cement control over the contested South China Sea.

The Philippines, Vietnam, Malaysia, Brunei and Taiwan also have competing claims to the strategically vital waters, but have watched China expand its presence by building artificial islands in key locations. 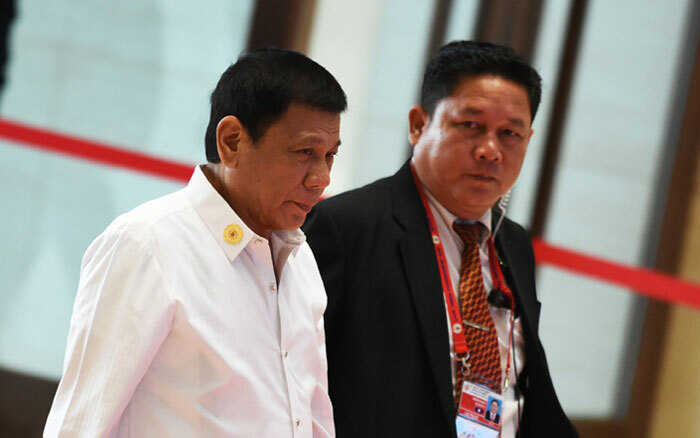 Philippine President Rodrigo Duterte (L) arrives at the convention centre to attend the 28th and 29th ASEAN in Vientiane on Tuesday. (AFP)

An international tribunal ruled in July that China's claims to the waters -- through which $5 trillion in global shipping trade passes -- had no legal basis.

The verdict was widely seen as a sweeping victory for the Philippines, which filed the suit under the previous administration of Benigno Aquino.

But China has vowed to ignore the ruling.

And Duterte has sought to heal relations with China rather than inflame them by pressing the tribunal's ruling.

Under Aquino, the Philippines had forged closer military ties with the United States to deal with the China threat. But Duterte has cast doubt on that strategy.

Obama's aides had previously said he wanted to discuss the South China Sea issue with Duterte in Laos.

Nevertheless, the South China Sea issue is expected to once again be discussed at the three days of meetings hosted by ASEAN, which will be attended by Chinese Premier Li Keqiang.

The gathering will see the 10 ASEAN members meet by themselves, then with leaders from the US, China Japan, South Korea and China.

Other leaders to come for an East Asia summit on Thursday include from Australia, India and New Zealand.

Obama's time in Laos will be the final trip to Asia of his eight-year presidency, during which he has sought to refocus American military, political and economic resources on the region.

It is also the first visit by a sitting US president to Laos, which the United States secretly carpet bombed for nearly a decade in the Vietnam War, killing tens of thousands of people.

In one of the last acts of his so-called "pivot" to Asia, Obama is expected to announce greater help in clearing the bombs.

"Symbolically, it is important... at the outset, as we're trying to build trust, a lot of work can be done around war legacy issues," Obama said before arriving in Laos late Monday from China where he attended the G20 summit.

"For the Lao, that involves dealing with unexploded ordnance, which is still plaguing big chunks of the countryside. We should help."

Obama will travel to the ancient capital of Luang Prabang on Wednesday, visiting a historic temple and meeting with students at a university growing up in a tightly controlled communist nation.