The journal titled The MISR review will publish scholarly work of doctorate students of the university under the Makerere Institute of Social Research (MISR) to a wider global audience.

PIC:Left to right:  Edward Kirumira,Deputy Principal at the College of Humanities & Social Sciences, Makerere University;  Kuan Hsing Chen, Professor from Taiwan and  Mahmood Mamdani,Director of the Makerere Institute of Social Research(MISR), launch the  Inaugural Issue of The MISR Review on August 12 2016 at Makerere University. Photos by Miriam Namutebi.

Makerere University has launched an academic journal that could put its students on the pedestal of global recognition.

The journal titled The MISR review will publish scholarly work of doctorate students of the university under the Makerere Institute of Social Research (MISR) to a wider global audience.

MISR director and founder Prof Mahmoud Mamdan said the move offers a great opportunity to strengthening research at the institution and will help doctoral students showcase their potential to the global academia. "We now have own vehicle of transmission of knowledge," he told New Vision.

Academic journals make periodical publications in which scholarship relating to a particular academic discipline is published. According online sources, the purpose of an academic journal is to give researchers a venue to impart their knowledge to one another, and contribute what they can in a bid to improve knowledge.

Mamdan, who founded MISR in 2012 after returning from US, also said the journal will combine local and regional knowledge production and will be rooted in relevant linguistic and disciplinary training.

The journal was launched recently at the university before a large audience that included local and renowned international academic gurus. 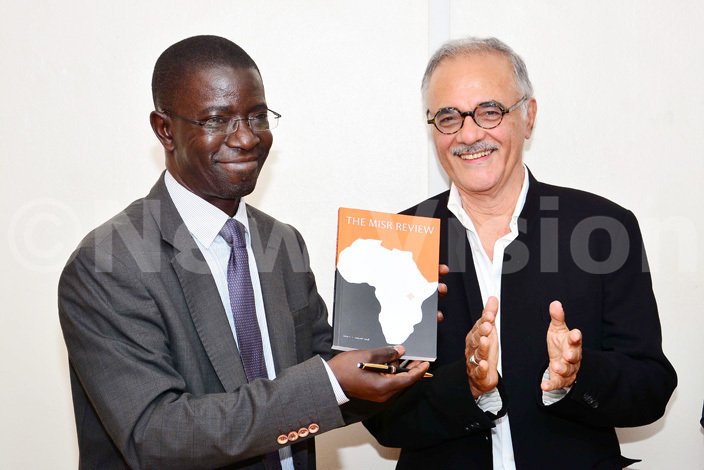 Professor Kuan-Hsing Chen from Taiwan said the journal will help Makerere become a centre of intellectual pilgrimage, hosting people seeking to exchange ideas from across the world.

"It will be a platform of intellectual interaction between Africa and the rest of the world," said Chen.  "It will open an opportunity for the world to know more about Makerere."
Prof Edward Kirumira, the principal college of humanities and social sciences challenged the students to gear their research towards answering the country's local problems.

The development is good news for students of MISR that has been in eye of the storm following bickering between Mamdan and Stella Nyanzi, a researcher, and Junior to Mamdan.

The bickering spiralled out of control in April culminating into the stripping naked of Nyanzi in protesting to her unfair evicting from institute after she was accused of refusing to teach as require under her job description.

Nyanzi was subsequently suspended from the university. In June, a committee that was set up by the university's vice chancellor Prof John Dumba Ssentamu found her guilty of wilful insubordination and refusal to take lawful orders.