Black Lives Matter UK had called for a national "Shutdown" to mark the fifth anniversary of the police shooting of Londoner Mark Duggan, whose death in 2011 spark several nights of rioting in cities across England. 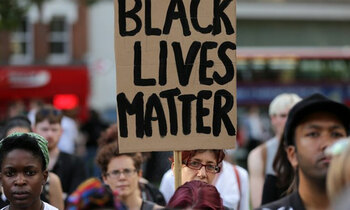 Activists from Britain's Black Lives Matter movement blocked the main road into London Heathrow, Europe's busiest airport, on Friday as part of a nationwide day of protests against racism.

Ten people were arrested during the demonstration, which brought traffic to a standstill at the peak of the holiday season, while another five were held for blocking a road to Birmingham airport in central England, police said.

Black Lives Matter UK had called for a national "Shutdown" to mark the fifth anniversary of the police shooting of Londoner Mark Duggan, whose death in 2011 spark several nights of rioting in cities across England.

"Five years ago. One day after they killed Mark Duggan. One day before the riots. A moment for rage, reflection and rebuilding. A moment for coordinated nationwide action," said BLMUK on its Facebook page.

The group, inspired by the US protest movement against police shootings of black men, has highlighted British deaths in police custody and the fact that black people in Britain are more likely to be arrested and jailed.

Pictures circulating on social media showed a small number of protesters blocking the link road from a major motorway to Heathrow holding a banner reading "This is a crisis".

London's Metropolitan police said they had arrested ten people after a group blocked the M4 slip road to the airport at around 8:30 am (0730 GMT).

Four had been taken into custody but by midday, officers were still trying to release another six who had "locked" on to each other, it said in a statement.

"One lane (of the road) remains closed to ensure the safety of protesters and officers," it said.

A spokeswoman for police in Birmingham told AFP that four women and a man had been arrested after they gathered on the A45 road near the city's airport at 7:00 am.

"Heathrow supports the right to peaceful protest within the law, but the safety and security of our passengers, aircraft and colleagues, together with the smooth running of the operation, is paramount," it said.

"We are sorry to those passengers whose journeys are being disrupted and we are working with the authorities to resolve the issue."