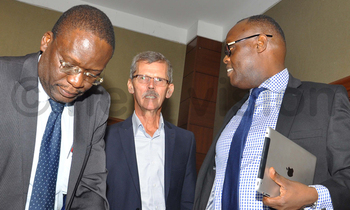 Two months after Britain voted to end a marriage that had lasted over a decade with ‘big brother' European Union; misgivings still linger especially in third-world former colonies about what the divorce entails for them.

Some of the fear seems to axis on the continued depreciation of the Pound that hasn't seemed regain since over a half of the population in the UK cast to exit the EU block and the potential reduction in remittances (to former colonies)the fall in value will have.

But some other trend readers think the break-up presents an arguably equal opportunity to forge new bilateral relations with the United Kingdom.

Veteran Journalist and researcher David Sseppuuya said the split-up represents a "you win some - you lose some" situation.  "Britain will now want to look for new allies. It might represent new opportunities for countries like Uganda (that are already in the common wealth)."

Economist Dr. Sam Nahamya said common wealth countries might now look to sidestep the agriculture tariff that did not "favor" exportation of agriculture products from Africa to the EU.

He said East African countries can now forge better and more favorable trade treaties with the UK "since it won't be bound by the EU block terms."

However, managing director and founder at ALPHA Capital Partners and Chairperson Uganda Telecom Stephen Kaboyo said the break-up opportunity cost was far much biased towards what was at stake in the East African region and the lessons the EAC could learn from the exit.

"Uganda gets close to $297m in terms of remittances from the UK per year. That's about 25% of its total remittances (that are about a billion a year). These remittances will drop with the uncertain Pound," said the Phenix Logistics Chairperson.

He said a possible recession in the UK would have a knock-on effect on the development assistance Uganda and the EAC countries receive from the country.

"This will hit budget support in areas of health, education, infrastructure and the rest," he said.

"Britain is not just a hub for trade. The impact on exports, on Tea and coffee and the other goods from the EA region will be big should there be a recession courtesy of the exit. Then the immigration measures... we will start to see cases of ‘immediately you finish school, you take the next plane and leave'".

He said ex-prime minister David Cameron will go down as the man who got UK out of the EU (for promising a referendum that caused the exit).

"God forbid should we have a (successful) Brexit and then a (Donald) Trump Administration in the USA," the man with an Irish origin said, fretful that the combination wasn't ideal for the world and for developing nations.

Sseppuuya said the exit might not bear "good example" for the EAC that signed the customs agreements and was on cusp to sign monetary and political treaties.

Former Makerere University Chancellor Prof. Mondo Kagonyera said the recent Islamic State terrorist attacks in Europe might have influenced the ballot, but said it did not require for the UK to exit Europe.

"They (UK) might feel their borders were now open and they wanted to be back in charge. But because the world currently faces trans-boundary challenges including disease outbreaks and terrorism, the UK should have remained," he said.

But other analysts think the exit may not happen. New Prime Minister Theresa May may not successfully trigger the clause needed to negotiate her country's exit from the EU block.