He will pray in the cell where Polish priest and saint Maximilian Kolbe died after taking the place of a condemned man. Pope Francis was set to meet Holocaust survivors at the former Auschwitz death camp in Poland Friday, as well as people who risked their lives to save Jews from the Nazis.

The Argentine will lead prayers for the 1.1 million mostly Jewish victims and has said that rather than making a speech he will stand in silent contemplation of the horrors committed and let his tears flow.

As he arrived on Wednesday in Poland -- the heartland of Nazi Germany's World War II atrocities -- the pontiff warned that the world had been plunged into a piecemeal Third World War.

He has repeatedly denounced those committing crimes in the name of religion, after Europe suffered a string of deadly jihadist attacks.

Francis will walk through the notorious "Arbeit Macht Frei" (Work Sets You Free) gate at Auschwitz, before meeting the survivors in front of the death wall where the Nazis summarily shot thousands of inmates.

The pontiff, who has forged ever-closer ties between the Catholic Church and Jews since his election in 2013, will meet 12 survivors, including a 101-year-old woman, at the site which is now a memorial and museum.

He will pray in the cell where Polish priest and saint Maximilian Kolbe died after taking the place of a condemned man.

The visit falls on the 75th anniversary of the day Kolbe was sentenced to death. 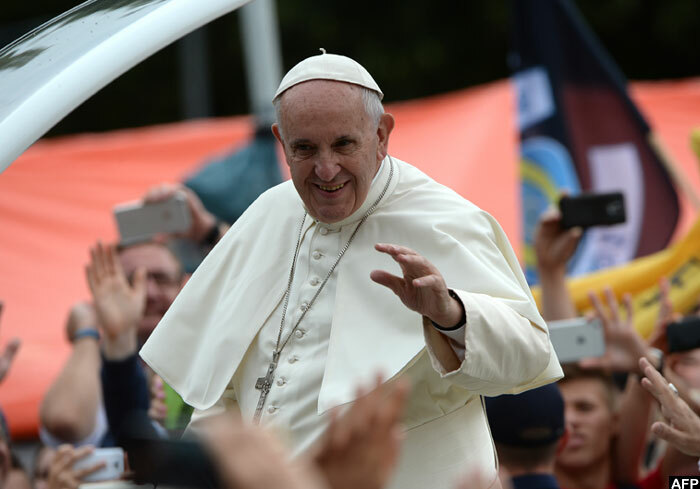 Pope Francis in popemobile at the Jasna Gora Monastery in Czestochowa, Poland

Poland's Chief Rabbi Michael Schudrich welcomed the pontiff's intention to remain silent during his visit to the camp, saying "often people go to Auschwitz... and they are silent (about the horrors) for the rest of their lives".

"Instead, once we leave Birkenau we must spend the rest of our lives screaming, yelling and fighting all kinds of injustices," he said Thursday.

The pope will travel the two miles (three kilometres) to Birkenau, the main extermination site, and be driven along tracks laid in 1944 to allow trains of prisoners to be transported right to the gas chambers and crematoria.

There, some 25 Christian Poles who risked their lives during the war to help hide and protects Jews -- a group recognised by Israel's Yad Vashem as "Righteous Among the Nations" -- will recount their stories to the pope.

The Holocaust is an extremely delicate subject in Poland, where locals fuelled by anti-Semitism were accused of butchering Jews or delivering them to the Nazis.

Those who did help sometimes paid the ultimate price.

A Hebrew prayer for the dead will be read aloud in Polish by a priest from a town where a Catholic family was wiped out after they were discovered to be sheltering Jews.

More than 100,000 non-Jewish Poles, Roma, Soviet prisoners of war, homosexuals and anti-Nazi partisans also died at the Auschwitz-Birkenau camp in occupied Poland. The Soviet Red Army liberated it in 1945.

Two of the pope's predecessors also visited the camp: John Paul II -- a former archbishop of Krakow -- in 1979 and Benedict XVI in 2006.