The leaks "put me on the same footing as those who haven't studied at all". 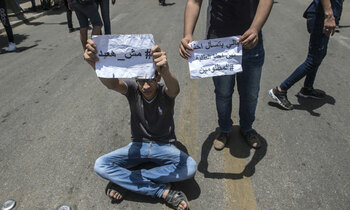 High school finals are always a terrifying prospect for Egyptian students. After cheat sheets were leaked this year, the exams turned into a nightmare for Mariam Khaled.

She had gone home to sleep after finishing an exam. When she woke up, she discovered she would have to resit it.

The leaks have put the spotlight on flaws in Egypt's education system, which critics say favours students who can afford private tuition to go on to coveted universities and faculties.

The leaks "put me on the same footing as those who haven't studied at all", said Khaled, an 18-year-old at a private school in Cairo who wants to become an engineer.

"I've been preparing my whole life for this exam to be able to plan my future. Now I feel extreme injustice," she told AFP.

The fiasco prompted student protests and clashes with police outside the education ministry in late June.

One placard at the demonstrations in June read: "2016, the class of injustice."

The answers had been leaked anonymously on Facebook by people who said they wanted to spark a debate on education in Egypt.

One Facebook group called on authorities to raise teachers' salaries and update curricula to match the jobs market.

Education in Egypt is in a "chaotic and absurd state, with corruption a main component", said Kamal Mogheith, an expert at the governmental National Centre for Educational Research and Development.

"What is happening is a wide-scale protest movement... against a failed educational system that does not teach a thing, yet it drains families' energy and funds for years," Mogheith told AFP.

Khaled's family say they have struggled to support her dream of studying engineering at a state university.

"Money was tight for the whole family due to high school expenses. Making funds available for school and private classes in the current economic situation wasn't easy," said Ola Mahfouz, her mother.

If Khaled is not accepted at a state faculty, she can still enrol at a private university, but that would place a further burden on family finances.

Egyptian students face fierce competition to study subjects such as engineering and medicine, which are considered routes to social advancement.

Over 12 percent of Egyptians were unemployed in late 2015, with the rate reaching nearly 28 percent among young people, official figures show.

With nearly half a million students enrolled at high schools in the academic year that ended in July, the challenge of reforming the system is huge.

The education minister promised this month that the exams' system would change starting next year.

Some students admitted they took advantage of the leaks, while others said they used bluetooth headphones and mobile phone applications to cheat.

Ahmed Hesham, 18, who attended the protest in June, said he cheated to level the playing field.

Hesham, whose father is a craftsman, showed AFP a group chat on WhatsApp through which he had obtained several leaked exam papers.

"The children of wealthy parents buy the exams, so why oppose the leaks now?" asked Hesham. "This is equality in an unjust and corrupt society."