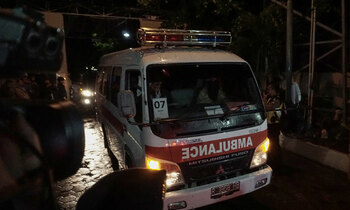 Indonesia executed four drug convicts on Friday but 10 others due to face the firing squad were given an apparent reprieve in a confused process one lawyer condemned as a "complete mess".

The executions on a remote prison island went ahead despite strong protests from international rights groups, UN Secretary-General Ban Ki-moon and the European Union who had urged Indonesia not to proceed.

Four inmates -- three Nigerians and one Indonesian -- were put to death just after midnight. One of the Nigerian prisoners was cremated just hours later, while the bodies of the three others were being prepared for burial.

But questions swirled about the handling of the process, which saw the other 10 prisoners slated for death -- including from India, Pakistan and Zimbabwe -- spared at the last minute without explanation.

Deputy attorney general Noor Rachmad said shortly afterwards that "the rest will be carried out in stages", but the timings had not yet been decided.

Ricky Gunawan -- whose client Humphrey Jefferson Ejike Eleweke was among those tied to a post and shot in a jungle clearing -- said lawyers awaiting the grim news were kept in the dark as to why the executions didn't proceed as planned.

"I would say the execution this morning was a complete mess," Gunawan told AFP from Cilacap, near Nusakambangan island, a remote island housing several high-security jails.

"No clear information was provided to us about the time of execution, why only four (were executed) and what happens to the 10 others."

Family members had already been shocked to learn on Thursday morning that their relatives would be put to death a day ahead of schedule.

Distraught relatives rushed to Nusakambangan to say farewell to their loved ones. 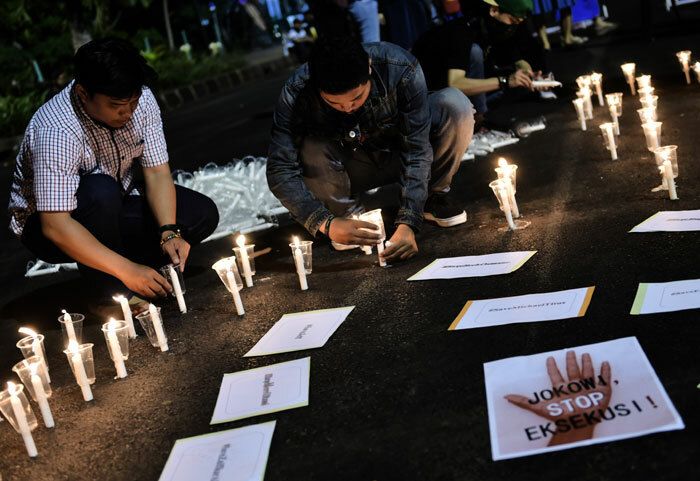 Indonesian men light candles during an anti-execution rally in front of the presidential palace in Jakarta on Thursday. (AFP)

President Joko Widodo has defended dramatically ramping up the use of capital punishment, saying that Indonesia is fighting a war on drugs and that traffickers must be heavily punished.

Friday's executions were the third under Widodo since he took office in 2014. The last round was in April 2015, when authorities put to death eight drug convicts, including two Australians.

The executed Indonesian was named as Freddy Budiman, while the three Nigerians were Seck Osmane, Humphrey Jefferson Ejike Eleweke and Michael Titus Igweh.

Eleweke's lawyer, Afif Abdul Qoyim, told AFP the execution should not have gone ahead as his client this week filed a legal appeal.

"When this process in not respected, that means that this is no longer a country that upholds the law, nor human rights," he said.

Amnesty International has identified what it calls "systematic flaws" in the trials of several of the death row inmates, and urged Indonesia not to proceed while appeals for clemency were pending.

Two people whose cases had raised high-profile international concern among rights groups were not executed.

The first was Pakistani Zulfiqar Ali, whom rights groups say was beaten into confessing to the crime of heroin possession, leading to his 2005 death sentence.

The other was Indonesian woman Merri Utami, who was caught with heroin in her bag as she came through Jakarta airport and claims she was duped into becoming a drug mule.

The National Commission on Violence Against Women, which has been lobbying for Utami to receive clemency, called for answers over the fate of the 10 remaining prisoners.

"We hope the attorney general's office will provide a clear and transparent explanation," the commission's Sri Nurherwati told AFP.