Kyadondo based Thunderbirds defeated Entebbe Sharks 10-5 in the final 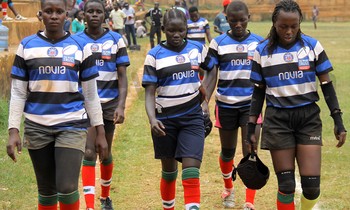 The national women's rugby team strength and conditioning coach wants more tournaments organised for them to be able to identify the talents for nurturing into national players.

Helen Buteme made the call after the Kitaka Memorial Rugby Sevens tournament on Saturday at Legends Kampala Rugby Club which was won by Kyadondo based Thunderbirds who defeated Entebbe Sharks 10-5 in the final.

"Lira, Kitgum, Gulu, Mbale and Busia all have women's 7s teams and the players from those regions would have benefited from playing games against more experienced players from Kampala teams," she added.

"It will be good if we have many more tournaments in the north and north eastern Uganda to select national team players," Buteme added.

She was however impressed by the level of skills players exhibited in the tournament.