Ntege passed on at Nsambya hospital after a long illness. He was 78. 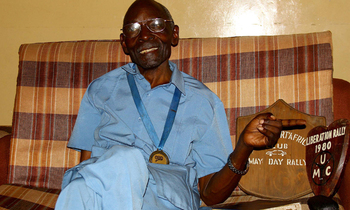 The Motorsport governing body (FMU) joined the family of the late Edward Ntege to pay their last respects to the former rally driver and administrator.

Ntege passed on at Nsambya hospital after a long illness. He was 78.

"He has been there for rally. He has been advising us and he never gave up, on us" Gombe stated.

"As a federation we shall miss him and may his soul rest in peace."

Ntege who joined rallying in the early 60s a service crew man, managed to become a navigator for John Kulubya Ssenseko before teaming up with the late Asuman Junju and Sospeter Munyegera.

The crew won several trophies before Ntege quit competitive rally in 1974 to become an administrator in Uganda Motor Club (UMC).