"I can't say a wrong word about that lady -- she will get this country back on its feet," Charlesworth told AFP. 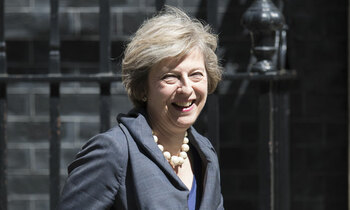 Jim Charlesworth has no doubts about the abilities of his local MP and neighbour Theresa May. "She will be the best prime minister this country has ever known," the 69-year-old said.

May, who will replace David Cameron as Britain's next leader on Wednesday, is widely viewed as hard-working, tough but approachable in her constituency of Maidenhead in southern England.

"I can't say a wrong word about that lady -- she will get this country back on its feet," Charlesworth told AFP.

May has represented Maidenhead, west of London, since 1997. She was re-elected as its Conservative MP last year with 65.8 percent of the vote.

"I never voted for her but I do respect her, she is a very hard-working MP," said Anne Matkin, 64.

She said May was "always willing to listen and to help people" despite, for the past six years as interior minister, holding one of the toughest jobs in government.

"She spends a lot of time in the area," adds Maxine Lattimer, a 46-year-old housewife with five children, describing her as a "nice, caring woman".

She recalled how May attended a recent parade to celebrate St George's Day, in honour of England's patron saint, along with her bodyguards.

After six years as home secretary, she now has the tough task of uniting the country and leading Britain out of the European Union.

Lattimer has no doubt that May is the right person to lead the Brexit negotiations.

"She'll be very assertive, she'll work really really hard for the best interest of Britain. She won't shy away from difficult decisions -- she is tough when she needs to be," she said.

The 60,000 residents of Maidenhead, many of whom commute to work in London, bucked the trend across England by voting for Britain to stay in the EU.

May, too, had wanted Britain to stay in and although she kept a low national profile, residents here say she had campaigned locally for the status quo.

"People felt that she did her bit," said Martin Trepte, editor of the local newspaper, the Maidenhead Advertiser, which has a circulation of 17,000.

May has repeatedly said that she will uphold the will of the public and that "Brexit means Brexit".

Trepte described her as a "mature, grown-up politician" who "knows her stuff" -- and says there are no skeletons in her closet, at least as far as he knows.

"In 19 years there has been nothing murky at all," he said.

He added: "We don't know too much about her. She's quite a private person. We know she goes to church regularly."

May attends church in Sonning, a picturesque village on the banks of the River Thames where she lives with her husband Philip.

Its charms have attracted other high-profile neighbours including Hollywood actor George Clooney and his wife Amal, and Led Zeppelin's Jimmy Page.

Gil Cattermole, another of May's neighbours, recalled popping in for a chat before the politician became home secretary and had to step up her security.

"I used to go around to her house and talk to her," said the 69-year-old, noting that when May now goes to church, she is accompanied by several armoured Range Rovers.

At the Bull Inn, a pub where Clooney has been spotted, May is also well known -- although they expect to see less of her once she enters Downing Street.

"She's always been very charming, very nice to customers and staff. She seems sort of genuine and very passionate about her beliefs," owner Christine Mason said.

"I bumped in her at the petrol station the other week. She is still relaxed doing the normal things in life. Always says 'hello' -- nice lady."