The dilapidated chambers with huge cracks and broken glasses leak whenever it rains. Its compound has also been turned into a grazing ground for the neighbors 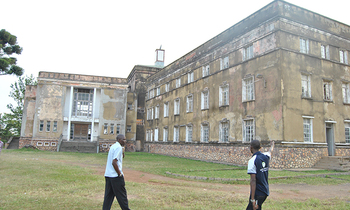 The poor state of the Toro Kingdom council chambers at Mucwa in Kabarole district has compelled all the kingdom authorities to buy the idea of turning it into a hotel.

The dilapidated chambers with huge cracks and broken glasses leak whenever it rains. Its compound has also been turned into a grazing ground for the neighbors.

In March this year, the Toro Kingdom Prime Minister proposed the construction of a four star Toro Royal Hotel to be housed in the current Kingdom chambers.

The kingdom cabinet anonymously bought the idea of turning Mucwa into a four star hotel. However weeks later the motion faced resistance from members of the kingdom parliament (Rukurato).

Notable among the people who opposed the hotel idea was Princess Elizabeth Bagaya who accused the kingdom prime minister of trying to destroy the legacy of follen King Sir George Rukiidi who constructed the chambers.

Bagaya was supported by Patrick Muganzi also a member of the Babiito royal clan who proposed that the hotel be constructed elsewhere but not at Mucwa.

"Mucwa is heritage for Toro it can never be tampered with" Muganzi stated then.

King Oyo Kabamba Iguru who was also in attendance then did not make any comment but days later his personal private secretary Jonathan Baguma issued a statement that the king had put a halt on a proposal to turn Mucwa into a hotel.

In a new twist however Tungakwo the kingdom Premier says that the King has already bought the idea and that the project will start before the end of this year.

Tungakwo explains that his office together with the ministry of in charge of kingdom investments have already acquired architectural designs for the hotel project.

According to the acquired designs, a third floor will be added onto the already existing two floors. The kingdom parliamentary hall will also be expanded to be able to accommodate all members of the kingdom's clan council on top of redesigning the current rooms to become hotel suits.

Other places to be redesigned and expanded include the compound and parking yard. The hotel will also house a kingdom museum among other things.

"The huge potential for Mucwa is not exploited as of now most of the used to be offices are unoccupied it's just a few rooms that have been rented out to the university and the revenue coming out is not worth it" Tungakwo said.

According to Tungakwo, more than 60% of what is required to realize the hotel project is already in place but only required a little polishing.

On how to achieve the project Tungakwo said that a number of investors have already expressed willingness to fund the project.

James Kaija the minister in charge of investment Toro Kingdom said that Mucwa kingdom chambers was purely an administrative structure constructed by Sir George Rukiidi and that currently the kingdom cannot fully occupy it.

"Mucwa was purely meant for Kingdom administration, turning it into a hotel is the only way of protecting and preserving it" Kaija said. He also dismissed claims that some kingdom rituals were being performed there.

Kaija says that renting Mucwa to a private university was a huge mistake because most students are careless.

According to projections, once completed Mucwa Royal Hotel will at least generate sh 70M annually to the kingdom on top of offering over 300 job opportunities to the sons and daughters of the soil.